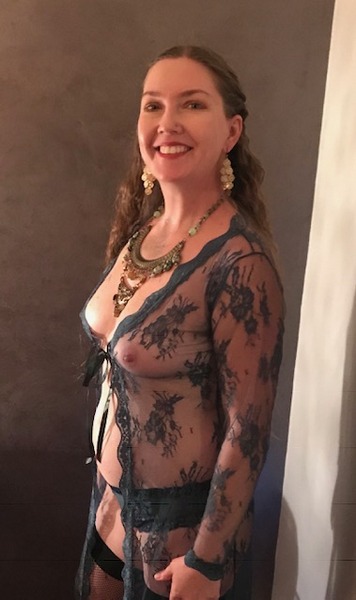 This is what I wore at the last party!

You can read FAQs and more on my Party page. If you’d like to be added to my party email list, email me answers to the questions listed on that page. With more than 600 people on my list, whenever I announce a new party, the spots fill pretty fast.

Here is what someone attending the last party shared with me about their experience:

“There was a couple in one of the side bedrooms making love with the door open. We walked by and saw them. Since the door was open, we stopped to watch because we love being voyeurs. The couple smiled and invited us in. We obliged and entered the room. The hallway light cast enough illumination to see them. The ambient lighting made the display all the more intimate.

They were engaged in a doggy-style position with a slow and steady pace. After watching for a couple of minutes, my wife Jasmine walked up to the woman and whispered softly in her ear. I could not hear what she was saying. I imagined in my head she was complimenting the beauty of her golden brown skin or her phenomenal smile she was displaying when she saw us watching them.

After Jasmine was finished whispering, I saw the smile again return along with an affirming nod followed with a verbal, ‘Yes you can.’

Jasmine started at her face, gently feeling her cheeks and then working her way downward. She rubbed her back and sides feeling every inch. She then worked her way back up her sides to her front to caress and cup her breasts. Then she gently moved up her cleavage to softly stroke her neck.

His pace quickened as all of this was going on. He was trying to hold out as long as he could. I give him credit for trying to achieve that! The scene was just too much and he came hard and collapsed beside his wife on the bed. My wife continued to run her hands all over this beautiful muse for another few minutes after the action had ended. It was like she was keeping the erotic energy going for her. She just smiled and soaked in all the touch that she provided, similar to watching someone soaking in the sun while tanning on a summer day. Afterward, they both thanked each other.

It was only later after replaying it in my mind did I then realize on missed opportunities to play with Jasmine while this scene played out. I was so enthralled with watching their pleasure that my own wasn’t a consideration at that moment. We ended up talking with them after and exchanging numbers.”

Yes, the parties are great ways to meet like-minded people! And bask in super sweet, sexy vanilla encounters. But not always!

Here’s me at one of the parties – if there’s a cage in the house, I will get in it!

I think because one of my mottos is “Think outside the cage,” and that I cherish my freedom so much, getting in cages during playtime is a safe way to “face my fear.”

And speaking of facing fears – I’ve seen things at my parties that have shocked ME – like the time at the “Playing Doctor” soiree, where a man dressed up as mad scientist Joker, complete with frightening face paint, and STAPLED A WOMAN’S PUSSY SHUT. Of course that was a negotiated and consensual scene, and they were bonafide sadist/masochist.

And then there was this other time where I saw an “Electric Eel” – 10 people formed a chain. The first person held an activated Neon Wand, which is a device that offers mild electric zap stimulation, and then he held hands with someone and so on, until the person at the end of the line was zapping someone! The electric current flowed through all of them! What a kinky conduit activity!

So it can get pretty intense. But it’s really whatever you want it to be – there’s plenty of play space for everyone.

It’s also rewarding to see a couple evolve. I’ve seen new people attend their first party or two, very shy and nervous and holding back, and then four or five parties later, they’re running around the place, wearing nothing but huge grins!

So, yeah – if you’re on my party email list, I will send out an announcement once I figure out the next venue and date. Stay tuned!

I’ve been looking forward to this one, and it did not disappoint. Now off to fill out the questionnaire.

We’ve been to several of Kendra’s parties, sometimes as voyeurs, sometimes as exhibitionists – usually a bit of both. It is always fun. My wife enjoys the opportunity to try new toys, roles and situations in a safe and welcoming crowd. It is a lot of work to arrange these events – Kendra is providing an amazing experience. Thanks!