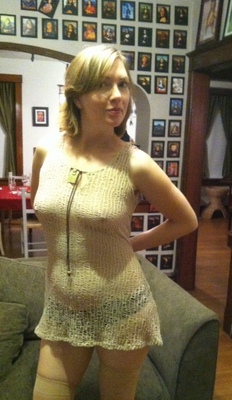 Last week, I posted about a fantasy I wanted to make happen in real life with Matthew and Lana.

Today, I detail how things really went down. You be the judge – which is hotter, the fantasy, or the reality?

The day of our date, Lana texted us the good news about her test results:

Now we were ready to make it happen! We were all SO excited – the fantasy matched each of our desires perfectly. Anticipation served as foreplay all day – all week, really.

The evening started with us chatting over drinks and catching up. Matthew warned her that he hadn’t been inside a pussy for 21 days, and hadn’t busted a nut in three days, so things could get crazy fast.

Sure, we were throwing down, but we were doing so in style. Candles were lit, and romantic Brahms played in the background

I wore a neutral, mesh teddy that accentuated my curves and nipples. She wore a short little black teddy with pink lip prints all over it.

He started things off by cuffing my hands behind my back. I tried resisting just for fun, but it was like slicing into soft butter with a sword – no contest. He had me locked down firm, then gave me a sweet kiss on my quivering lips, and tied the small, silver key to one of the strings hanging off the teddy’s neck. Then, he sat me down on a small tan tuffet at the foot of the bed, fashioned from a folded blanket. I was out of the way, and in position. He murmured, “Sit. Watch. I’ll be back.” I obeyed, like a well-behaved puppy expecting a treat. She stared at our exchange, wide-eyed.

Then, he turned his attention towards her. She stood there, looking up at him expectantly. He kissed her, hands roaming over her body, caressing her breasts through the gauzy fabric of her teddy. He spun her around and kissed her neck and shoulders. She moaned slightly as he pressed his swollen cock against her soft panties. He pulled her lingerie off, caressing her now exposed nipples, kissing her neck hungrily until she almost came. He stopped short of her explosion….

Then, he put her on the bed, and ate her pussy. The sound of his belt unbuckling was her signal to grope for him and suck his cock, which made it one step closer to being inside her.

Now they were both fully undressed. Pulling the sheet up with him, he positioned himself between her legs. I couldn’t see all the details, but did my best to guess when he finally was inside her. First he teased them both by rubbing his rigid cock head up and down her wet, eager pussy. Then, with a grunt, his hips shifted down, and she gasped, impaled. Then, it was ON.

They were both turned on, they didn’t need much of a warm up. In my fantasy, I envisioned them making love, nestled in pillows and missionary, but this was more like primal fucking all over the damn place. He fucked her so hard the bed springs screamed and the mattress levitated, which reminded me of The Exorcist, except hotter.

At one point, with the brown sheet gathered around him and her beautiful, shapely legs wrapped around his high-speed bulk, it looked like a bear fucking a woman. She gasped, “Oh…God….Fuck…..Oh….Shit……Fuck……Yes!” in bursts, timed with his thrusts as he forced strokes of cock as deep as he could. It was almost as if she was only able to breathe as he pulled back, prepping for another pound.

And as he really dug in, the room bloomed with the heady smell of her feminine fragrance. She kept looking up at his big, broad furred chest, his intensely bearded face, as if trying to register what was going on. WAS she fucking a bear? A viking? A friend?

Then he repositioned her, pushing her face down on the bed, her perfectly round ass in the air. Gripping her hips, he plowed into her again and again, causing her to squeal and gasp.

She scrambled on top of him and worked her magic, massaging his dick with her rippling pussy. As she rode him, the two dimples above her ass winked at me, and I marveled at the glorious sight. He was so manly, and she was so beautiful. So yin and yang – colliding spectacularly.

When he finally came, he roared, and she pushed down hard on him. I know he came SO hard inside her.

She leaned down to kiss him, breathing heavy, then he pulled her off him and laid her on the bed, legs open wide.

He rode her hard and put her away wet.

The entire time, they did not look over at me, which is what I wanted. I wanted them to focus on each other, and I wanted my space to soak it all in. So often I’M the one face down in the pillow or have to suck a cock while he pleasures a woman, which is so frustrating!

Later, they told me they were aware of me being in the room, but my presence was not distracting. They were able to get lost in the moment, and me being cuffed in the corner only added a glimmer of kink to the scene.

As for me, I felt warm and open watching them. I was super turned on, and did not experience that prickle of jealousy that I thought I might. In small doses, that prickle can really add intense arousal, but in too large of a dose, it just makes you want to puke. I guess I didn’t feel left out because I knew I would be getting a turn soon… 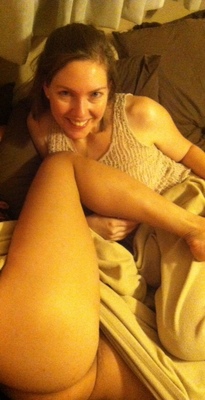 SO happy to be between these legs!

He pushed my face down and ordered me to clean her up. OMG it was so slick and delicious!

After a bit, he uncuffed me so I could get a better handle on the situation.

Then it was my turn. I laid back and she started eating my pussy as he kissed me. I was so turned on I was worried I’d squirt in her mouth again, so I urged them to switch places. Her small, cat-like tongue was quickly replaced by his big, paddle-like appendage. It wasn’t long before I exploded and shook like crazy.

We took a break, rinsed off, then he went back to eating her pussy. He murmured, “I like how your pussy tastes after it’s had my cock in it!” After she came, he rose up and pushed his hard dick back into her tightness. He fucked her into orgasm oblivion again.

He said, “Lana, I want you to sit on my face while Kendra sucks my cock.” Lickety split, she had us arranged so that we were all in an oral triangle – a 3 69, if you will!

Lana is SO sexy, and a naturally good lover. For all you voyeurs and pervs out there: tomorrow I’ll post more pics of her amazing legs and feet so you can get a better look!

She finally tore herself from the bed so she could get home, sleep, and go to work the next day. We kissed her goodbye. Until next time…

After she left, he groaned, “GOD I wanna fuck you so bad!”

“I KNOW!” I exclaimed in agreement. So bittersweet!

I had to get off again, then I jerked him off. “C’mon, rub my dick on the outside!” he demanded.

I hopped on top of him and did just that, careful not to let the flared head catch my hole and plunge in. I sat on him and kept jerking him off. Our flesh was pressed so tight together, it looked like I had a dick and was jerking off on him!

The first two weeks were okay, but now it’s KILLING ME!!!

there’s lots to comment about, but this is the first thing I thought:

Um, thanks! It’s driving me crazy right now! I need a trim! Still trying to grow it out so it’s long enough to braid again!

My goodness this is HOT!!!! Time to take a cold shower!

Also your place (whoever’s place that is) is so neatly arranged I thought you were in a store or a coffee shop or something. ;o)

Oh yes that’s my friend’s house, she is very artistic. I’ll be posting more pics of that night soon – she hosted the Sissy Maid Tea Party!

Hot hot hot! I’d be reading it over and over and replaying it in my head too!

It’s perfect. I took my time to read both. I’m a visual and fantasy prone person, reality is the perfect moment and I’ve felt all these things. Thanks for sharing xx

Kendra, you are a very beautiful women. In the picture take at your friend’s house, you look so supple and almost translucent! Divine!

Thank you! I do feel like a Greek goddess… I love my body – so seasoned, soft, it is good to me and brings me such pleasure!

“The room bloomed….” It most certainly did, and I could smell that feminine fragrance just reading your account of it.

ooh I’m so glad! A good writer (or any artist) makes people FEEL!

Thank you for giving us the gift of your writing, Kendra. Your words paint a beautiful picture of the evening and the anticipation leading up to it. The story was arousing, humorous at time, compelling, and intense. Lana is one lucky lady to call you and Matt her friends and to spend such a glorious evening with both of you. I will definitely be back to read it again and will look forward to your next post.

Your situation is very common! A lot of men like novelty and variety. Sex can be very creative. Good communication is key!

Enjoyed reading your fantasy. I get a pleasurable feeling when other like minded souls post their fantasies. I’ve been to a couple of snuggle parties where it gets a bit risqué. Watching an amorous couple and not being a participant is exciting. Reading your fantasy is as close to the real thing. Well done!