The Professor: My Version

Ed Note: This is the post that was front and center when my former boss discovered my site in 2010 and fired me for having a sex blog. Um, yeah. 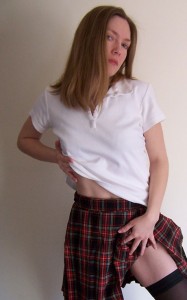 Matthew, Rockabilly Girl and I were up for some Professor/student roleplay.

He told us to wear skirts with no panties or bra. The air was charged with sexual tension, but he didn’t make his move, not yet. He informed us, “The game begins when a glass of whiskey is set in front of me.”

I eagerly fetched him a glass, and with the clunk of the drink on the table, a switch was flipped.

Rockabilly Girl and I stood nervously grinning as he took a swallow of Dr. Jeckyl/Mr. Hyde potion, set it down, then loomed over us.

He was the Professor, and we were his students.

We looked at each other and giggled, but he was dead serious.

“Yes, please Professor, we don’t want to lose our scholarships,” we said earnestly.

“You two are roommates?” he asked.

We giggled and tentatively faced each other. Then we started making out, sighing and getting into it.

He circled us, leaned it to sniff us, stood very close.

He ordered us to undress each other. We unbuttoned our tops. They fell to the ground. Then he told us to get down on our knees. We obeyed.

He unzipped his pants and pulled out his cock. We eagerly sucked it together, taking turns bobbing our heads up and down on it, licking his balls, inhaling his manhood.

Then he stood us up and bent us over the table, side by side. We ached with anticipation.

He lifted our skirts and said coolly, “I’m going to fuck both of you now. Whoever gets my load gets an A.”

He pushed his cock into her pussy first. I looked over my shoulder so I could watch it slide in.

He possessed her swiftly, and I wriggled with lust.

Then he switched over to my hole, invading my saucy little pussy as if it was the first time. I gasped with delight.

This time he didn’t hold back, he impaled her hot, wet pussy fiercely as I kissed and nuzzled her neck and breasts as they hung and swayed over the table and she held on for dear life.

He roared and unleashed a torrent of hot seed deep inside her. That made me weak in the knees and I melted – I sank to the floor and crawled over to gaze up at their sticky union.

“Thank you for making my Professor/Student/Cream Pie fantasy come true,” I sigh as I cuddle into his big, strong embrace.

“Anything for you, Darling,” he murmurs into my hair.

(You can read his version of this scene here.)

I remember that! Your “outing” story and those blog posts after that about your ex were when I found you on the internet. That was right when my ex and I were getting divorced. She was waving around court my kinky love letters I wrote to her and sending them to my work in an attempt to hurt me and keep me from having custody of my kids.

Thanks for standing up to your haters, doubters, and persecuter with courage and dignity. That helped me feel not so alone out there, and helped give me strength through that insanely tough time.

Ysy for making fantasies come true but boo for losing jobs. I wonder now, if after all this time, you feel like being outed eventually gave you and opportunity to explore a life that maybe if you had not lost your job you might never have done?

Oh FOR SURE! They ended up doing me a great service. I have been able to live authentically and realize so many dreams since that “tragic” day! Just look at the post I just put up!

I remember when that happened as well. And quite a hot post!