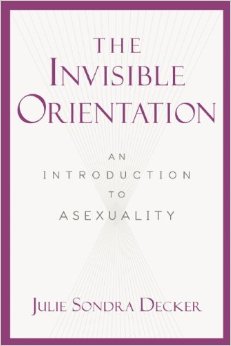 UPDATE: Sex Positive St. Louis is hosting a talk on asexuality Sunday, May 24 at Shameless Grounds, from 2-4pm. Guest speaker Tom will tell us all about asexuality and share his story. My asexual daughter and I will be there!

I recently read this fascinating book called Who’s Been Sleeping in Your Head: The Secret World of Sexual Fantasies. The author polled thousands of people, and was surprised to learn that 10% of his sample group reported no sexual fantasies. He was skeptical, wondering if they were in denial or had super repressed fantasies.

Maybe they really don’t fantasize about sex. Maybe they aren’t interested in it. Maybe sex isn’t a priority for them.

Which leads me to THIS book – The Invisible Orientation: An Introduction to Asexuality.

I’ll admit it – I used to think asexuality was not real. I couldn’t wrap my head around the concept – sex is a huge part of my life, so how could it be insignificant to someone else?

Then, when I finally acknowledged it was real, I was of the mindset that it was odd or the person was defective, and hopefully they would eventually outgrow the notion and get with the program – sex is the most important thing in the world.

Boy, was I ignorant!

I know there are a lot of people like me out there, so I’m glad this book has been created as a reference guide to educate the public about 1 in 100 people who identify as asexual. Asexuality is not a disorder. Asexuality is a sexual orientation characterized by sexual attraction to – are you ready for this?? – no one. Asexuality is an orientation, like bi, straight, gay, etc.

Furthermore, if this excerpt from the book blows your mind or causes you to scratch your head:

Asexuality is not a mental illness or disorder. It is not caused by a negative event, medical issue, or abuse.  It’s not the same thing as having a low sex drive. It isn’t about hating people or failing to meet the right person. It isn’t about hidden homosexuality. It has nothing to do with religion. It isn’t a cry for attention or a reason for therapy. It doesn’t mean a person is ugly, socially awkward, or lonely.

Then you really need to read the rest of The Invisible Orientation. It expands on all of these key points, and is very well-written, clear and concise.

My 14-year-old daughter has never been sexually attracted to other people. She has been romantically drawn to both males and females, but sex is not of interest to her.

When I tell people I think she might be asexual, they always respond with, “It’s probably just a phase. She’s a late bloomer.” As if there is something wrong with the current state of her development.

The author wrote this book in order to provide the next generation of asexual people a chance to live life more fully and without self-doubt.

One thing I learned is that there are SO many more ways a person can identify than just “asexual”, “heterosexual,” etc. When they talk about fluidity in terms of sexual, gender, or romantic orientation, they aren’t kidding! I lost count of how many labels were defined – “graysexual,” “demi-romantic,” “queerplatonic,” “lithromantic” – more than I ever imagined! And you can be a combination of two or more! At different stages of your life!

On top of that, what IS the difference between romance and friendship? How many levels of friendship are there? It gets pretty mindblowing.

I thought I had things covered with my daughter, but it turns out there is much more to discuss with her!

My biggest takeaway reading this book is that we shouldn’t make assumptions about anyone’s orientation. Be understanding and appreciate diversity. If you find out something you weren’t expecting, don’t blurt out something stupid and insensitive. Instead, nod and process.

I found the chapter directed at asexual readers interesting – the author provides many great tools for coping and educating others about asexuality. For instance, if you choose to come out to your partner, each of you should come up with your list of must haves, dealbreakers, and what you’re willing to compromise.

The book has many great resources to learn about sexuality, with the focus being on asexuality. Here are a few examples:

SmartHot has a chart that helps you clarify your desires.

Scarleteen has a similar tool.

And my daughter loves the Asexual Advice Tumblr.

Just a reminder – being sex-positive is about accepting people for who they are, even if they are different than you.

This is an interesting blog post, connecting the lack of sexual fantasy to a lack of sexual desire. My partner is one of those 1/10 who just doesn’t fantasize about sex. When I ask him what kinds of sexual things he likes or wants to do, his answer is usually something along the lines of, “You know….. sex stuff!” He isn’t asexual, but sex definitely doesn’t hold his fixation the way it does some people. He enjoys sensual experiences and really doesn’t care all that much what they are, so long as they happen with someone he loves. It’s strange and interesting for me, because my sexual desires tend to be very specific, usually tied into my hormonal cycle. It has taken some time to get used to, that’s for sure!

I might consider him to be close to the definition of a “stone sexual” – someone who enjoys giving sexual pleasure but who doesn’t particularly enjoy or feel the need to receive any kind of sexual touch….. Again, that isn’t him all the time, but it’s close.

“Stone sexual” is a new one for me! People are so fascinating!

Thanks so much for the review on my book, Kendra. 🙂

For clarification, I should say in the book I recommend asexuality be a label “for maturing or mature people”–not that it should be restricted to adults. I just say that to avoid detractors attaching it to a sexually embryonic state that kids grow out of. People who are expressing sexual attractions at a young age are easier to fix a label to because it looks like something–so straight, gay, bi, and pan kids would certainly be able to adopt said labels–and asexuality is hairier because it’s indistinguishable from “not yet” on the outside, but if a maturing young person feels they’re asexual, it’s certainly fine for them to use the term. It just shouldn’t be applied from the outside by people who misinterpret it as a blank slate that will be written upon when maturation arrives. Hope that makes it clearer so you won’t have to feel like it needs a disclaimer if you recommend it!

Your help with the book has been lovely. I appreciate it more than I can say. ~~

I work with Paula Poundstone a lot, and she’s a fan of yours, and is, of course, asexual and hilarious.

Paula quickly said “Then it’s good to be me. Cuz I never have to hear that!”

Which is silly, because Paula is delightful.