This is me in high school. I was a punk rock teenager – very depressed, wore black all the time, always feeling desperate, dramatic, negative. 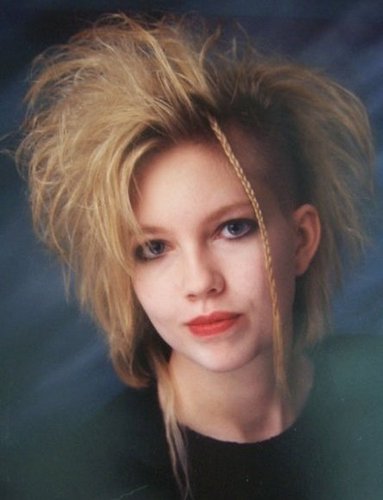 High school senior pic – I was about 17

This is a page from my journal when I was 15, circa 1988 – I met a 24-year-old guy named Greg at a high school party, and he latched on to me. He constantly badgered me to have sex with him: 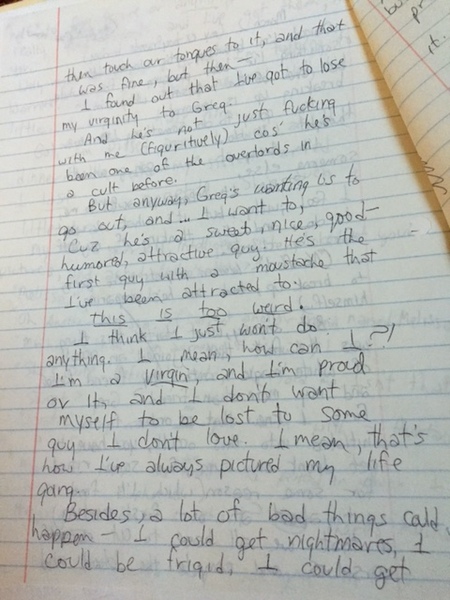 From my journal during my teen years

He used all kinds of tactics to get me to cave in – it was no big deal, it was a very big deal, it would make for a good witchcraft initiation, and I was being a cock tease and it wasn’t fair to him.

He finally convinced me to have sex with him, and I did, on the floor of his dad’s apartment. It was okay, but immediately afterward, I was convinced I was pregnant (even though we used a condom), and I had a lot of shame and guilt. I hated myself for doing it. I freaked out so bad, I ended up in a mental hospital! I had a horrible relationship with my parents. I ended up taking medicine, and dated this guy for a while, until I wandered off and started dating someone closer to my age. Of course I was branded a slut, blah blah blah, the rest is history.

I remember all the sneaking around as a teen and having to find awful, dirty, nerve wracking places to have sex – the backseat of cars in industrial parks, closets, underneath a muddy deck, in the woods… it’s hard practicing safer sex and feeling pleasure in those conditions.

I had it really rough as a teen, and I’m SO glad my 15-year-old daughter is having a better teenage experience. I raised her sex-positive, and we’ve been having a series of good, age-appropriate conversations since she was about seven. She has a boyfriend now, and he is super sweet and respectful, and they are exploring things very slowly together. I’m so proud she chose him. She’s having her first romance on her own terms, and she has good support in place. She’s being educated properly, she has access to condoms and privacy, and best of all, she doesn’t have guilt and shame to contend with.

I wish everyone could be introduced to sex at the age that is right for them, and be given a sex-positive education – one that goes beyond STI’s and birth control, but also encompasses feelings, pleasure, consent, power exchange, and mutual respect.

My daughter and I will be giving sex-positive parenting talks November 22 and January 3 – check the SEX+STL calendar for details!

More great sex-positive resources can be found in the right column of this website, as well as the SEX+STL Links page!

Yep, the angst of teen sex, coming (literally) of age, and consequences. I started early (by then standards)and managed to knock up my GF the first time I had sex (and only time with her). Yep, she had baby and it was adopted by very grateful couple. The girl was the aggressor… no talking her into anything… she knew what she wanted and it was me inside her. It did disrupt my life as my parents moved out of disgust at me… but that is life and I gained insight from that experience… I am PRO CHOICE and anti-abortion… but its entirely the woman’s right to decide if she wants to abort but I’d never advise any woman to have an abortion. I may be in the minority on this, but that’s how the whole experience affected me. I have a son out there (never been contacted for info) I’ll never meet, but I’m glad it happened because LIFE happened. My story, not advocating anyone else to follow my path. Ciao. WD

I need to dig into this! https://t.co/IjKIPDmJsq

Nothing says "adult" like being on the hook for your dad's $7385/mo memory care bill. 😰

Daddy is dying, I’ve begged for hospice the past month & they keep denying my request. He needs comfort measures an… https://t.co/NtfsVODXi2