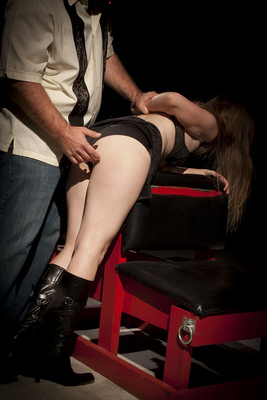 Me getting spanked by Matthew! Photo by Mike Estes

We arrived at Hustler’s Taboo night.

Thankfully, we were mature enough not to let anything interfere with our great evening, which is a good thing, because it got better every second…

Taboo was crowded and full of activity. They have quite a bit of equipment – a rope suspension section, couches, spanking benches, St. Andrews Crosses. All were in use, but soon a spanking bench opened up, and we seized it.

I eagerly bent over the bench. I was wearing a sexy little business top and skirt. The skirt hem was asymmetrical, so when I walked or bent over, you could see where my lace stockings met my pale thighs.

He worked me over, grabbing my hair, spanking me, lavishing me with good, hard attention.

I got hot and ripped off my top and bra. Lana glanced around surprised. They allow nudity here!

It was so stimulating and exhilarating! I kept laughing and giggling.

He pinned my arms behind my back and instructed Lana to tend to my top as he tended to my bottom. This guy parked himself right in front of me and stared hard. Not a problem, but he was a little too close for our comfort, so Lana stood at my head, providing a barrier between us. I’m sure he didn’t mind her ass in his face.

We were buzzed and happy.

Next, it was her turn. She had been smacked on the ass during sex, but never had a spanking like this.

He bent her over the bench and started smacking her gently.

She popped up and turned to face him. “You can hit harder than that!”

“I’m warming you up,” he informed her.

She resumed her position.

He spanked her well. I loved watching her face flush, her hair run wild from the bun it was in, lips parted and gasping. He would rub her ass, alternating between spanking it and slipping under the short red hem to rub her pussy through her panties. At one point, he focused on her clit and brought her to orgasm as two men observed.

Boy, we were all warmed up! Ready to seek our entertainment elsewhere, we headed back to her place.

Here we were, planning to get together on Sunday and ease into things, but BAM it happened spontaneously that night.

She and I kissed. They kissed. At one point, she spanked my ass!

Then he asked, “Lana, do you have any condoms?”

She hopped up and grabbed one. He put it on and she got on all fours, arching her back seductively.

He went to enter her and I shimmied up underneath her like a car mechanic and put my arms around her, clinging and kissing her neck as he fucked her.

We rotated and she went down on me for a bit, which I wasn’t expecting!  We 69’ed, then he laid on the bed for his turn. She sat on his face and rubbed orgasms out of his tongue as I sucked his cock.

I kept sucking while she made out with him. She whispered in his ear, “I want to taste you.”

I caught half a load in my mouth and pulled away so she could catch the rest. We snowballed in victory!

When we got home, I initiated another round of sex. This time, I grabbed the lube and guided his cock to my ass. I wanted to feel it ALL.

That’s right, I used him until 4am.

It was a brutal day, but TOTALLY worth it.

I made it through the work day. The entire time, I thought about our night of debauchery, replaying hot, surreal moments and squirming during meetings.

Oh, and for the record, after it was all over, he turned to me, looked me in the eye, and told me going to Taboo was a really good idea.

We keep trying to make plans to go to Taboo Night, but the last few times we tried to plan it, it turned out we had other commitments that couldn’t be altered! I was wondering if you happened to go, or if you’d had any experiences there, so this is great to read!! As always, you’re an inspiration!!

Reading this gripping, intense book by a mother about her son who has schizophrenia. The cover is his self-portrait. https://t.co/oMDtJvSiMT

Excerpt from my sex worker friend's newsletter: "Try not to be creepy. I don't respond well to creepy, crazy, dang… https://t.co/9zPZgIyqfZ

The biggest causes of dementia are lack of sleep and stress.

IT'S OCTOBER. Very still and clear. First full moon of the month. The next one is Oct 31... https://t.co/MSuHuKgOYT