Sex at Dawn: The Prehistoric Origins of Modern Sexuality 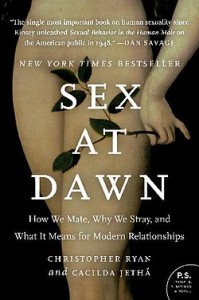 Last winter, Matthew and I were at our romantic cabin getaway. We had just fucked and were lounging in front of the fireplace, sipping cocktails contentedly. The cabin closest to us was occupied by a couple also trying to get away from it all. Unfortunately, they weren’t quite succeeding.

They were having a big fight.

Doors slammed. Amidst the commotion, we heard the woman scream, “You fucked someone else last night – I’m not stupid ya know!”

We looked at each other with raised eyebrows.

I drawled, “I’m glad the fact that you fucked someone else last week isn’t ruining OUR vacation.”

“Yeah no shit!” he agreed with a swig of his drink.

We toasted each other.

More drama floated through the trees our way. “I’m leaving!” the man cried, got in the car and drove off. He came back a few minutes later, knocking on the door. “Let me in!” he begged.

I rolled my eyes and joked, “Do you think we should go over there and offer them some relationship advice?”

“Fuck no!” he grunted. “Let them get their own damn copy of Sex at Dawn.”

He was talking about the book, Sex at Dawn: The Prehistoric Origins of Modern Sexuality

It’s all about how our society came to embrace monogamous marriage as the standard (hunting/gathering was replaced by agriculture, which dramatically compartmentalizes things, to the point where women are considered property) and why it doesn’t work (humans are not naturally monogamous.) We WANT freedom. We WANT to share.

I have to say, this book provides a great foundation to understanding how our relationship is set up, and why it works so damn well.

The book features sections titled “The Pervert’s Lament,” The Promise of Promiscuity,” and “Everyone Out of the Closet.” See? Perfect for me!

Despite the titillating titles, it packs an intellectual punch. It’s like several anthropology and evolutionary psychology books rolled into one (Sperm Wars, Why Beautiful People Have More Daughters, The Third Chimpanzee); it’s a sexy version of Jared Diamond’s Guns, Germs, and Steel: The Fates of Human Societies

Reading it was like running into a bunch of old, familiar friends – the authors cited Desmond Morris, Jane Goodall, Charles Darwin (he says your mother is a whore! see Chapter 3), E.O. Wilson, Robert Sapolsky, to name a few.

Questions posed in the book include:

“Why is one of the most popular songs in U.S. history Percy Sledge’s When A Man Loves a Woman? We’d like to suggest an alternative title for this song: When a Man Becomes Pathologically Obsessed and Sacrifices All Self-Respect and Dignity by Making a Complete Ass of Himself (and Losing the Woman Anyway Because Really, Who Wants a Boyfriend Who Sleeps Out in the Rain Because Someone Told Him To?)”

So many things in our culture don’t add up. It’s important to examine these inconsistencies and address why social norms aren’t working and how we can be a happier, healthier society.

Look, Matthew and I have been enjoying an incredibly passionate courtship that’s been going on three years now. The information shared in Sex at Dawn offers a detailed background on why it’s so successful, but I’ll break our secret down for you here:

Often in our patriarchal society, people remarry and force their families to blend, which can make things more complicated and stressful. Living together and limiting options neutralizes passion and ennui sets in. Spouses begin to take on the characteristics of siblings or business partners. Frustrated and unhappy, people pop anti-depressants, cheat on their partners, and feel guilt, shame, and disappointment.

It doesn’t have to be this way.

Matthew and I were both married and monogamous for almost ten years. We reproduced. When our boring, traditional married monogamous relationships ended, we both decided we would not put ourselves in that oppressive situation again.

Instead, we opted for an open relationship that allows us the freedom to explore our sexuality and other people. We are polyamorous. We don’t live together. We aren’t under the influence of artificial hormones. We are surrounded by love. We have an incredibly fulfilling sex life. Our relationship is based on mutual respect. We have the best of ALL worlds. He is my Sun King; I am his moon goddess.

Sex at Dawn explains why the traditional marriage model came to be and why it is unnatural, but only briefly touches upon alternative ways of living. The authors have given us all this information – now what should we do with it? The book begs a companion follow up that daringly picks up where it leaves off. How can we use this revelatory information in order to create a healthier, more realistic way of life that will set us up for success?

Despite NPR’s Peter Sagal featuring this book as his favorite book of 2010, NPR hasn’t been brave enough to give it proper airtime. Rumor has it that the concepts promoted within its pages are “too X-rated.” Reminds me of my love life! I guess it’s all too easy to misunderstand things that make society squirm.

I want to see this book featured on the Colbert or Daily Show. I wonder if Bill Maher has read it. It wasn’t on the New York Times Bestseller list long enough, dammit. C’mon everyone, for the sake of your sanity, you need to read this book!

I’m meeting the authors of Sex at Dawn next week at ideaCity in Toronto! Hard to believe that they reached out to me when I came out last October, and now we’re presenting back-to-back at an international idea conference! http://www.ideacityonline.com/upcoming-ideacity/schedule/

A sexy version of Guns, Germs and Steel is exactly how I described the book too! 🙂

I was lucky enough to get to hear Christopher Ryan speak about his book at a small bookstore for free in Portland right when the book came out. The NYT hadn’t touched it yet and everyone was really surprised it hadn’t blown up given the current discussion about polyamory. I don’t know what came first (me paying attention, or the books) but the book really did seem to accelerate the conversation. I have two copies on my shelf because my friends borrow it so often. I like your remark: “I’m glad the fact that you fucked someone else last week isn’t ruining OUR vacation.”

Kendra, I’m curious – how much do you think environment/upbringing goes towards making the decision to accept polyamory?

I have chosen monogamy, but mostly because I am soooo jealous and pained at the thought of being “cheated on” (heavy quotations) that I keep myself on-point and spend all my energy on one woman. I DO, however, notice this choice dulls my own sexuality – I certainly don’t have as much sex as I probably would were I in a different chosen scenario.

The books you cite all give excellent causation scenarios for polyamory, but my question to you is whether you think upbringing/environmental occurrences can overcome the genetic markers in our being?

I think our upbringing and society plays a huge role in how we feel about sharing our partners. If we are raised to think partners are property/territory, then we will be more likely to highly guard them.

If we are raised in a society that shares resources, including intimacy and partners, we will feel more natural about it.

It IS possible to acclimate to non-monogamy, but it takes time and patience. You can’t expect to undo years of conditioning in a matter of months.

I’m always interested in the take that you have on nonmonogamous relationships. It’s got my interest up considerably. So I thought I would go ahead and ask you a question or two about it. I’ve known one or two women that I wanted to screw so bad I thought I would lose my mind, but I found also that when the woman openly gave her self to a lot of different men. I suddenly lost far more interest in her then if she had been more or less just for me. What I’m trying to say here in all this is that if you meet somebody you really want to make as your relationship partner than how can you justify screwing around on somebody else.

It seems that’s what you advocate in your advice column that it’s OK to screw around because you get bored with the person that you are with. There is some truth to that, it’s hard to be a human being without the dichotomy that goes with it. But if you could see the inside of my mind and how badly I wanted to plug this woman (fuck) you would be surprised at the intensity that I could feel. And I don’t think that I WOULD HAVE LOST THIS INTENSITY OVER long extended period. So how do you deal with being crazy bat shit jealous and then at the same time say all the things that you do about the fact that you play around and that he plays around. Jealousy must enter your relationship at some point or another (I just have to be totally honest with you that humans confuse me more than anything else in the world, you just have to fight yourself constantly)

A great book that answers your questions is called Sperm Wars! http://www.amazon.com/Sperm-Wars-Infidelity-Conflict-Bedroom/dp/1560258489

And yes, we sometimes experience jealousy. We process it and learn from it.

Today has been a bad day.😔

During my decompression time, I've been catching free movies on YouTube, some nostalgic, some I've never seen befor… https://t.co/Vvww2hpwOJ

Did you know that USA sent Ukraine Javelin surface-to-air missiles that require batteries, but no batteries? So, th… https://t.co/qvUuv9p9ZG