Check out that definition of love (click on image to enlarge)

Okay, so we have Silver Ring Thing, Promise Rings, Purity Rings and wedding rings, but what about a ring for sluts? Do you know of any rings out there made for people who are in touch with their sexuality?

I did a search the other day for fun slut jewelry, and instead of finding retailers celebrating sexuality, I found this blog Dalrock, written by a “happily married man living with his sexy wife and two kids in Dallas, Texas.”

I’m pretty sure Dalrock would agree with me that he is anti-feminist, but I wonder if he acknowledges that he hates and fears women? If men are from Mars and women are from Venus, well you would think this guy would want to blow up Venus and go live on a man-only planet.

Makes you wonder what his wife is like, doesn’t it? I wonder if SHE is happily married.

You’ll find many gems buried in the comments as well. Take this one from Pol Mordreth:

its the feminist brainwashing that makes many frown upon marrying that young. Any woman serious about marriage and children should be marrying at the peak of her attractiveness, and having children fairly soon while she still has the greatest probability of 1: having healthy children; and 2: getting her body to bounce back to optimal health quicker afterward.

And then there’s Dalrock’s piece on Interviewing a Prospective Wife, in which he states:

You are head over heels in love with this woman, and she is with you.  You have great chemistry, she is sane, has basic life skills (can handle a budget), you have compatible views on religion, kids, etc.  I’m also assuming she is broaching the question of marriage.  Men formally are the ones to propose marriage, but in every case I’ve seen the women unofficially raised the subject first and usually with a sense of urgency.  Instead of freaking out, you can use this opportunity productively.

Ask her questions such as:

Will she take your name? I can’t personally think of a convincing reason to marry a woman who wouldn’t or who struggled with this question.

What if you are “in the mood” and she isn’t (aka “wifely duty”)? Part of what this will show is her general willingness to consider your needs over her own feelings (altruism) and her tendency to look for opportunities for compromise.  This will also give you a hint about her perception of male sexuality.

Just like the racist who commented on my blog the other day, it blows my mind that there are still so many people out there who are scared of people who are different than them.

I guess there’s a need for Purity/Promise Rings because the people who wear them need a constant reminder to resist natural urges. Otherwise, they will act on them and feel really guilty and ashamed and not be worthy of human companionship, which is what they were craving in the first place.

Sigh. I guess I’ll stick with my SLUT pendant made by Surlyramics. I’ll be wearing it with pride this Saturday at SlutWalk St. Louis. 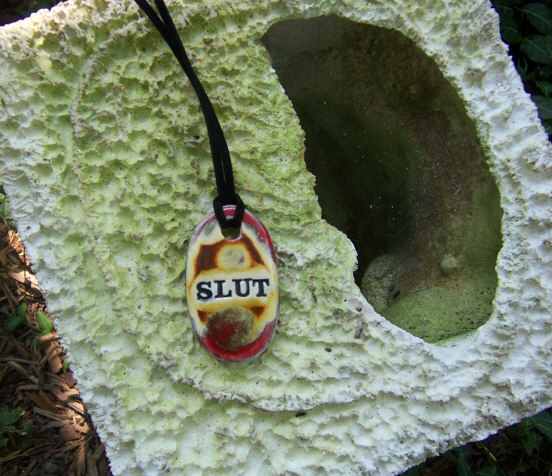 Proud to be a SLUT

Be sure to play the Reformed Whores “Slut” during the slutwalk: http://youtu.be/fZK75pXLlbY

Ugh!!! This mentality of men is exactly why I hated the idea of “saving myself” for marriage that was taught in our church growing up. I feared that I would end up stuck with someone I wasn’t totally compatible with, including sex.
What I’m curious about in regards to his wife, is if she is one of those women who truly believe the crap he spews. That she is to be there to serve his needs regardless of her own feelings.

I am wearing my VIXEN necklace on Saturday.

Hey, Rockabilly Girl, I resent being painted with such broad strokes with a brush intended for Dalrock. Men, indeed! We are no more monolithic than women are.

My apologies, I meant men of that mentality, not men in general.

Your vixen necklace was so cute RBG! I also liked your “cougars need love too” shirt! 🙂 xo

Some of his ‘Feminist failures’ sound more like ‘Feminists have already won’. I mean, being one of many women in an office who have all broken into the same field?

This guy is an absolute waste of a “man”. I wonder what the young girl was like that crushed his heart in grade school. Who was the pubescent female that “denied” him in high school? How many young women declined his efforts in college, to make him set his sights on the insufficiently confident woman that actually married him? It is my most sincere hope that he dies without procreating.

Don’t forget his mother – I wonder what their relationship was/is like.

<3 surlyramics, she also blogs at http://skepchick.org/
At a rural supermarket noticeboard I saw an ad -"urgently seeking a MRS", with "must do what is told at ALL times," would have been kinky if there hadn't been so much jesus-y stuff preceding it… I feel like these folk would be super fun and kinky if they weren't so mean and crazy…

HA you are right… fine line…

Why would you marry a woman who couldn’t answer those questions? Not take the man’s last name? Might as well save the lawyer fees and give her half your stuff now and start paying alimony. She’s going to be banging a richer and more powerful man before the wedding photos are developed. And thanks to femenism the divorce laws are made to facilitate the fleecing of men. You want a man to sacrifice his freedom and women don’t have to give up anything? That’s a lousy partnership. This is the problem with feminism, it ignores innate sexual traits and forces men to conform to women’s invented expectations while refusing to compromise itself.

Displaying some token clearly visible would be helpful. But I don’t think women who are not ‘sluts’ should wear them.