Premature Ejaculation: Not So Fast 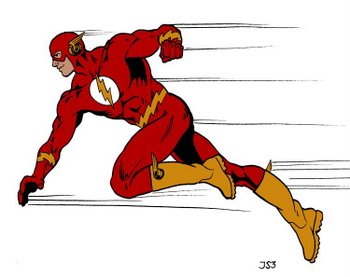 Gotta learn how to control your super powers

Did you know that the average woman takes about 20 minutes to achieve orgasm? The majority of men, on the other hand, don’t have a problem coming in 5 minutes. If a woman can orgasm during intercourse (though not all do), she’s going to require more time than most men need. Basically, a woman’s orgasm is like a symphony, whereas a man’s is more like a rock song.

In general, men can stave off the inevitable for the sake of his partner, employing techniques akin to swinging a guitar solo or engaging his audience. Some men, however, have trouble lasting even five minutes—it’s more like a radio jingle—and they’re anxious to build up their longevity so they can properly satisfy their partner. Plus, radio jingles are annoying.

There’s an interesting phenomenon called The Coolidge Effect, which got its name from President Calvin and Mrs. Coolidge. Seems the First Couple was visiting a farm, and Mrs. Coolidge remarked that she wished the Commander in Chief were as randy as a rooster they saw strutting around. President Coolidge retorted, “Well it’s no wonder I’m not as frisky; I’ve only got one hen in my henhouse.” The Coolidge Effect is when a man become bored with his regular sex partner, but gets “over enthusiastic” (comes in a flash) when introduced to new ones.

Case in point: as a sex surrogate, I worked with a 45-year-old attorney who said he’d could go a decent amount of time during intercourse with his wife of ten years, but now that he was divorced and dating, anytime he got with someone new, he had trouble lasting more than a couple minutes, leaving him baffled and frustrated.

I took him for a test drive so I could see firsthand what he was talking about. I laid back and he climbed on top of me—and immediately started humping away like a jackrabbit. No warm-up, no seduction. I was amazed.

“Whoa, whoa,” I said, taking him by the shoulder. “Let’s start out slow and work our way up, okay?” After he slowed it down, things were much more relaxed. It gave me a chance to get into it, and after a few minutes he worked his way back up to his jackrabbit pace and came.

He’s not the first guy I’ve met who seems to only know one speed—fast and furious. Women generally need time in order to become aroused. If a guy just plunges in, it can hurt, until we get accustomed to the pace and catch up.

This guy was simply not paying attention to anything other than getting in and off, and that needed to change. The issue was emotional connection. When one partner is emotionally disconnected, or too self-involved in his/her own pleasure, the other partner can be left out in the cold. Ask yourself: Do I know how to pleasure my partner? If not, you need to take the time to learn.

This 38-year-old had a similar problem: He possessed awkward social skills—he didn’t smile much, was a bit detached and cold, gave minimal eye contact, and was very uptight. Whenever he was with a woman, he came too quickly, sometimes before he could even get inside her. He said he had better luck controlling his orgasm when he was by himself, but when he was in a dating situation, it was game over before it even started.

I worked with him slowly. My goal was for him to get comfortable and used to being with someone. It helped that I knew of his anxiety—usually he tried hiding it from the person he was with, which only made things worse.

After some talking sessions, I set up a relaxing environment for some hands-on work—dim, candlelight, soft music, I wore beautiful lingerie. I had him lie facedown in his boxers and receive a warm oil massage. I touched his body all over, went slow, spoke reassuringly. Once he relaxed and became aroused, I put the condom on him and started out missionary. He slid inside me, but right away yelped, “I feel like I’m gonna come!”

“Stop. Pay attention to yourself,” I whispered soothingly. “Focus on your breathing. Breathe. Breathe slowly. Focus on what is happening right now, not what’s about to happen.”

He did as I said, and we kept pausing whenever necessary so he could regain his momentum without going over the edge. After a couple more positions, we ended with doggy style. I gave him the green light to let himself go, which he gratefully did.

We got together four more times to practice his technique. With each session, he became more at ease, lasting longer and longer. The proud smile he had last time I saw him was so satisfying! It’s my hope that his progress carried over to real life dating.

I’m not into suggesting you think about dead kittens or angry mothers-in-law as a way of taking your mind off what’s going on. Instead, be present in the moment and enjoying it, but put your partner’s pleasure first. If you make your partner a priority, then your own pleasure will follow. Here are some other things to try:

• Wear a condom. You can even try desensitizing condoms or doubling up.
• If you’re going bareback, try using silicone lube. It offers a different sensation than water-based lube, acting almost as a micro-thin barrier.
• Don’t pee before having sex. Sometimes if you have to pee, it blocks the urge to ejaculate.
• Save positions that rub you the right way until last. Start with missionary and end with girl on top or doggy style.
• Have sex with your partner more often. A friend of mine used to only have sex once every two weeks with his ex-partner, and he found himself coming really quick. Now he’s in a relationship where he’s having partnered sex every day, and he has no problem controlling his orgasm.
• Experiment with you or your partner finding your “stop spot”—pushing on the base of your penis or the area between the balls and anus as a way of interrupting orgasmic buildup.
• Explore Tantra. Tantra is about being in the moment, not hurrying towards a goal of orgasm. A lot of men unconsciously carry the mentality they had as a teenager. Tantra retrains you. You can even train yourself to separate orgasm from ejaculation, meaning you can have as many orgasms as you want in a session!
• Communicate with your partner. If something is bothering you, speak up! Hiding things from your partner will only perpetuate dissatisfaction. You may have avoided certain topics in past relationships. How did that work for you? Now is your chance to break the cycle and be open and honest.

Patience and regular practice is the key. Experiment with some of the advice I’ve imparted here, and be kind to yourself. If you keep working on it, eventually you will become the master of your own orgasm.

I think what you do is truely amazeing. As someone who experiances a sexual issue, I now have hope that it can be overcome and i will be able to find true intimacy with my partner.

Having an understanding, forgiving and patient partner (or surrogate partner) is probably key to being myself enough to really be able to make your tips work their magic. I wish that I weren’t so far from STL; your videos show much more than physical beauty!

Welp, my websites are still down, with no response from my web host. Frustrating, busy, harried day. But it's lovel… https://t.co/y2GfKaqRjE

My websites are down right now. Dad's dementia is acting up. But I already had coffee and a walk on this beautiful Sunday morning. ☀️