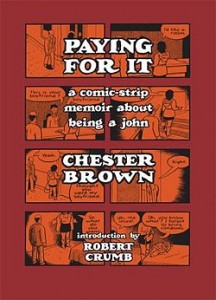 Chester Brown's Paying for It

In our society, the world’s oldest occupation – prostitution – is still such a taboo subject.

I do it, I have friends who do it, but we can’t really speak of it freely.

You’ll notice when Rush Limbaugh called Sandra Fluke a slut and a whore, all of us sluts rose to her defense and proudly declared ourselves sluts. But the whores kept pretty quiet. No one was ready to own THAT word.

Pretty much everyone has an opinion about prostitution, which is fine, but personally I care more about the opinions of people who have firsthand experience, as seen in this comments thread on a blog post by Greta Christina.

Cartoonist Chester Brown is out about being a john. What’s more, he’s unapologetic and unashamed. Oftentimes, men who pay for sex are thought of as losers.

“I’m very far from being sad or lonely,” he says in his memoir, Paying for It

. “I haven’t caught an STD, I haven’t been arrested, I haven’t lost my career, and my friends and family haven’t rejected me.”

Not only does this book allow us to peek into the world of prostitution (set in Toronto, where prostitution is decriminalized), but it also delves deep into the concept of polyamory, monogamy, jealousy and romantic love.

Brown came to form a series of relationships with various prostitutes (or “escorts,” as some huffily insist on being called) due to finally deciding that boyfriend/girlfriend relationships bring too much unhealthy baggage to the table. Better to be friends with someone and skip all the drama brought on by the false ownership of romantic love. (See the book Sex at Dawn for the history of marriage being a possessive endeavor with unfortunate consequences.)

The book offers an appendix that intelligently and logically explores the most common arguments against prostitution.

I was surprised the book was small and hardback – I had a little trouble with the small print, but I have bad eyes. Once I finally got a chance to sit down and read it, I devoured it quickly. I prefer the comic-strip approach to short essays, as I’m getting so accustomed to the bite-size information age ala blog posts and iPhone screens.

I could TOTALLY relate to some of the stories he shares – the good, the bad, and the ugly, though his experiences never get too ugly. Sometimes he was misled and the woman who greeted him at the door was not who he was expecting. Sometimes she was unprofessional, running late and ill-prepared (“I forgot the condoms! Be right back…”) But for the most part, his experiences are surprisingly pleasant. He notes, “Paying for sex isn’t an empty experience if you’re paying the right person for sex.”

In fact, the ending completely surprised me, which I won’t reveal here, should you want to find out for yourself (my copy of Paying for It will be donated to the Shameless Grounds library).

I hope you learn a lot reading this book about the men and women who participate in sex work, as well as the society we live in. This book reaffirmed some of my unconventional feminist beliefs and helped me understand where the men are coming from. I’m always wondering why I can’t seem to secure a regular relationship with men where we see each other once a month or so, like a scheduled massage. There are many factors that throw wrenches in the mix, such as the chaos of life, moods and whims, chemistry, the thrill of risk-taking, and novelty.

Our brains crave novelty, and some men find experiencing different women every month as natural as trying different restaurants. Certainly understandable – it’s not a cheap past time, and I’m glad for that. There is great value in this service, and it should be treated with compassion and respect.

I blogged about the men that I see and our conversations about paying for sex, and surprisingly MOST of the men say the same thing;…..”I LOVE Variety”. There’s really no drawn out excuses or reasons, just the love of sex and freedom.

We’re all different pieces of the same Pie!

Thanks bunches for the book recommendation Kendra! Both Brent and I have visited the Bunny Ranch in Reno/Carson City, NV twice now, and I can honestly say we both had the time of our lives there.

And we both agree on this: Prostitution SHOULD be legal all over the country, and you can’t do better than to adopt the Nevada model, with revisions to meet each state’s individual needs. Take away the criminal element, make it safe with mandatory medical exams and condom use for guys, and everyone’s happy!

I’d do it fairly regularly if I weren’t afraid of being busted for it. My fear of being arrested as part of some sting has kept my money in my pocket and my member in my pants.

Author Chester Brown sent me a message that clarifies something I wrote in my review:
“I hope you don’t suffer any negative consequences as a result of your decision to come out as a sex-worker. It was easier for me to come out as a john since it’s not technically illegal to pay for sex in this country. (Although it’s a bit inaccurate to say prostitution has been decriminalized in Canada. Outcall prostitution is ‘decriminalized’ [it’s not regulated or licenced] in most of Canada, but incall stuff and streetwalking ARE illegal here.)”

I love it when you do reviews like this to bring to my attention books I should be reading and purchasing. Have you tout about adding a section on the site just dealing with books that everyone should be reading? Just a thought.

I communicate regularly with a sex worker (anunlikelywhore) in Australia. There brothels are legal, in certain parts of the county certain sex acts are required to be covered, but overall their approach to hired sex is so civilized compared to our good old USA moralistic approach. My interactions with sex workers in this country have been mostly in connection with the need for intimacy post-operative (radical prostatectomy). A necessity due to lack of libido of my spouse (medical issues, etc.). But I love the fact that women will provide intimacy to men who cannot source it in their relationships. I consider that sacred. Power to the Pros!
WD

I’ve been thinking on this more. I’m really interested in trying this. Without leaving the country or heading all the way to Nev, are there any ‘safe’ options?

Hm, just came across this post, looks like the book would be an interesting read… I will definitely pick this up. Sadly, it’s not available in the more discreet formats (Kindle, Nook…)

Yes. I’ll get the book. Thanks. I have two friends who go on use MyRedbook dot come to find local ladies, some 200 work my area I’m told. Yes, a local bust of Johns (stupid) slowed things here of late I’m told.

For some reason, for three decades now I’ve been friends with whores. Jesus was friends with whores; maybe that’s why. Never hired one but actually sponsored the relocation of one from Nevada who was aiming to retire. She became a dear friend. Met some others in person via reviewing their books (the dear saint, Veronica Monet is one; what a lady) and several sex workers: Nina Hartley, Aunt Peg (Memory Eternal) and her friend Carolyn Elderberry (Women of the Light; by Ray Stubbs) whom I count as personal friends. Loved Nancy Qualls-Corbett and her book Sacred Prostitutes.

Thanks Kendra, for making us thing about these things! Love your blog.
(see my 2014 Memoir: Sex With Librarians and God)

I’ve viewed these women as spiritual, women who do soul work; helping professionals, working in the world of healing.and intimacy much like Cheryl T. Cohen-Greene and her work shown in the movie Sessions.

Every time I see my dad, he plies me with romantic comedies from his DVD collection. Which one should I watch on th… https://t.co/RQATpRelvM

An example of caring and competence. Just think of all the people who were alive Jan 1, and will be dead by the end… https://t.co/nGoqw25X0w

The nurse who gave me my physical came to my home. She's been doing home visits for 30 years. She said people used… https://t.co/PZSHfz2vmf