OMG I Shaved My Head!

If you want to know why I shaved my head, read this post.

If you want to know details of the headshaving, keep reading here!

The week leading up to it felt like I was preparing for a fetish wedding to myself. The venue was booked, the little black latex dress I wore arrived in a box like a TV dinner, the photographer was hired, and the matron of honor, Kat Surth of HaircuttingFun.com, flew in with her badass haircutting gear.

One of her admirers also came in town for the event, and took us out to dinner beforehand. We dined at Sidney Street Cafe, one of my favorite restaurants, but I was too nervous to really enjoy it.

An hour before the event started, I got really sick. I huddled in the bathroom and cursed myself. “You can’t wimp out now!” I muttered. “Get over it and get out there. Face your fears!”

I pulled it together and donned the dress. It was awful short and tight. Adding the patent leather heels and dramatic makeup and I was as far removed from hippie goddess as you could get. OK, shave off my two feet of tawny hair and THEN I was way outside the hippie box. More like Blade Runner or something.

Time for a Haircut 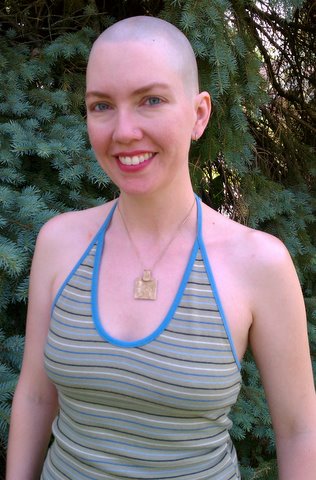 I mingled with the people who came to the party held at Koken Art Factory in the industrial Tank Room until about 9:30. They were mostly friends of mine, but there were also a few people who had a hair fetish that came in from out of town to experience in real life what they’ve only seen on videos online. Some people refused to attend; it was too freaky for them. In fact, the St Louis Post Dispatch refused to run my press release, stating it was “too extreme” for their forum. One woman who attended told me she wanted to wear a motorcycle helmet, for just watching made her feel too vulnerable!

The closer it got to actual showtime, the more nervous I got. That is exactly why I wanted to do it! I wanted to face my fears. I felt so dreaful taking center stage! My dress was tight, the lights were bright. We had to kill the hair theme music playlist in order to video the spectacle.

Everyone loved Kat. She wore a nude colored latex dress with matching heels and gloves. She assumed the role of a sensual Domme, which I appreciated very much. I felt very submissive and quiet. I shrank into myself. My heart was beating so fast. Don’t get me wrong, I was eager to do this but I also wanted to get it over with.

She put a salon cape on me and played with my hair, capturing every angle before she cut off my two tiny signature braids with her huge scissors that looked straight out of a cartoon horror clip. The audience gasped at the first snip. I had a bald spot!

Then she gathered all my hair up into a high ponytail.

Brandishing vintage clippers, she started mowing at my scalp, all around my head. The clippers whirred, as did my brain!

It was so surreal, I mentally checked out and stared into space. I felt trapped, helpless, resigned, out of my element. My fate was in her hands.

My head tilted to one side, I could feel my ponytail hanging off half my head. I felt scalped and freakish.

Finally, she cut the ponytail off and triumphantly held it up for the shocked crowd to see.

I would have preferred just a buzzcut, but she insisted on lathering up my head and taking a straight razor to it. I was not looking forward to that part, but if I was going to do it, might as well go all the way.

After she let the cream sit on my head for a few minutes, she slowly scraped a sharp razor over every square inch of it. She was very theatrical about it, licking the razor seductivly and wiping the stubble on a sheet draped across my shoulder.

It felt pretty nice. I enjoyed all the attention and sensations. When she gently blew on my exposed scalp for the first time, I about had an orgasm! It felt electric and amazing!

When she finished shaving my head, I felt so naked and weird. I had NO idea what I looked like, but I knew all those people could see something I couldn’t. I felt freakish, but everyone was smiling and supportive.

I didn’t want to look in the mirror. I still felt like Kendra, but knew I looked insanely different.

When I finally got a glimpse of my shiny dome in someone’s camera phone, I was completely blow away with how much I looked like a mannequin. I looked very futuristic and sharp. Part of my femininity was stripped away, but I still had a pretty smile and curves! It was a bit of a mindfuck. I have to say – Kat Surth did a fantastic job.

I celebrated with a drink with my friends. Lots of pictures were taken, including some with me posing with the four other bald guys who were there. The contrast was so odd – we were all the same, but they were normative and I was freakshow.

It would definitely take some getting used to, but it was still me.

Meeting Kat and getting to witness this from the front row was something I’ll never forget.

I also stood as witness and watched as her lovely hair was transformed into her lovely, bald head. Quite an experience.

As I look again at your pic on FB, I am reminded of Joan of Arc – is that too cliche? How does it feel growing back in?

I AM SO PISSED I MISSED THIS!!!

It is delicious to read your experience of going bald. I did this for the first back in 2007. I think the experience is amazing enough but it is blown away by what happens afterwards. Especially noting the reactions of people you walk past in the street. My typical experience was adults: bald woman = something wrong/sick and would hard not meet my eyes. Kids: bald woman = ooo what? Different! Stare!

I hope you have been enjoying this since then. My favourite part was having my head stroked when it had grown out a little. Cheers!

Since I've made so much less $ this year, I've paid less in quarterly taxes. 💸🙁 https://t.co/VlueO3jnjD

I helped my dad with his absentee ballot! 🗳️

Tonight's @sexpositiveSTL check in at 6pm cst will be my last one for a while. I've been doing them consistently th… https://t.co/kZAicOAex1

Visited my dad in his apt today. He had a bowl of water out for a black cat he hallucinated 😻