My friend offered to conduct an orgasm experiment with me! 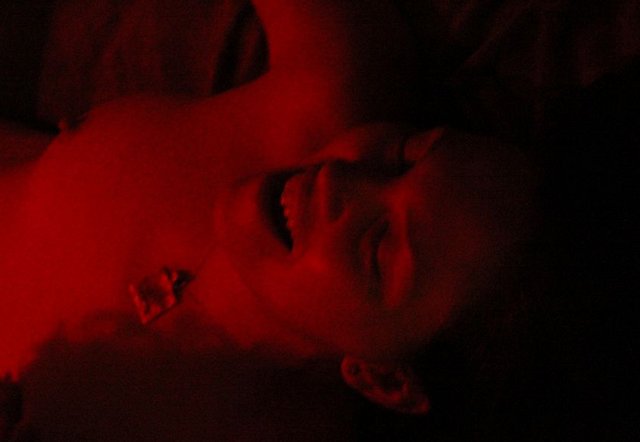 He came over wearing a lab coat, carrying a clipboard and some measuring equipment.

We wanted to see how long it would take me to orgasm while he measured my heart rate and blood pressure every minute. We also audio recorded it.

He got me hooked up to the portable blood pressure monitor and sat by my bed, dutifully holding the clipboard and taking notes.

I stripped down and grabbed my new wireless Magic Wand.

“What are you going to fantasize about?” he asked.

“I think I’ll go with recalling some erotica I read earlier today about a virgin who gets impregnated on an island by a caveman, that was pretty hot.”

He nodded, then offered, “Here’s what I think you’d be into – imagine Matthew calls you up and is with another woman and is giving her an orgasm and wants you to listen.”

With that, I was ready to rock. RIGHT as I was about to hit record, my next door neighbor fired up his motorcycle right outside my bedroom window! Arrghh!

My Doctor said, “We can wait a minute, he’ll leave soon.”

I said, “You don’t understand. For some reason, he revs it up, then sits around on it for a few minutes, then revs it some more, then drives around the block a couple times, then comes back to idle in the driveway some more.”

So, fine. I closed the windows and we went ahead and started. I hit record, the blood pressure cuff squeezed my arm, and I switched on my Wand.

But the motorcycle was distracting! I kept switching off the recorder and trying to get a quiet take. Then the recorder would turn off on its own, and I’d have to fumble around and turn it back on again. Meanwhile, he sat there observing me, jotting down measurements. Talk about technical difficulties!

Normally it takes me less than ten minutes to achieve orgasm with the Wand, but I was so distracted, I couldn’t focus on my fantasy.

After a few minutes, I jumped up and grabbed my Wand attachment. THAT always does the trick, and gives me a really powerful orgasm.

More fumbling – I stuck it on the head of the wand, threw some lube at it, checked the recorder again, and the cuff squeezed my arm again…

After 20 minutes, it STILL wasn’t working!

Finally in desperation, I abandoned the Wand and resorted to using my frustrated fingers. I was probably sick of all the motors and machines around me!

Not long after taking matters into my own hands, I felt my heart surge and my body tingle in that fun and familiar way.

I muttered, “I’m getting so close!” then backed down, then revved up again, and BINGO! Orgasm! Since it took so long to achieve it was extra powerful and relieving!

Here is the Doctor’s fancy graph of my orgasm – Click on it to enlarge! 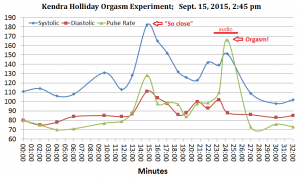 My orgasm in data points.

and here is the audio of the orgasm – the last two and a half minutes, anyway. Be careful – it gets LOUD!

I was expecting my blood pressure and heart rate to go up during orgasm, but wasn’t expecting it to be such a dramatic increase! My heart rate leapt up to 162 beats a minute! And it was interesting to gauge my measurements when I was getting close, but not there yet – my body was ramping up!

Mission accomplished! It’s so much fun being SEX GEEKS!

Thank you for your unselfish contributions to science – there are many more data points that can be collected, such as: body temperature (rectal probe), respiratory rate, skin galvanic response (sweat), muscular tension, brain waves (EEG), etc. How about some intravaginal ultrasound or even video images of pelvic responses? I’ll see if I can arrange some MRI time…
Keep up the good work!

HA thanks. I had someone send me this message: “Streamed your orgasm through the car stereo while navigating traffic at 40/270 this morning. Thanks for making the commute much more enjoyable!” HA love it!

and at least two offers to help me conduct more in-depth studies. Fun! I need to re-open a Masters and Johnson clinic in St Louis, complete with sex surrogacy, group therapy, and more! 😉

Nice! I’ve done heart rate monitoring during sex and audio recording, but never at the same time.
Also, you’re welcome to jerk off in my recording booth, anytime.

Kendra,
First of all I would like to take this opportunity to tell you how much we enjoy your site , once a week , usually on the weekend, my wife and I sit down a surf to your wonderful website. Your site is interesting and informative.You are doing wonderful things in St Louis.

Thank you for sharing the audio , my wife and I listened to it a few times together, you are very sexy !