My Daughter and Me

This is a picture of my daughter and me, from half her life ago: 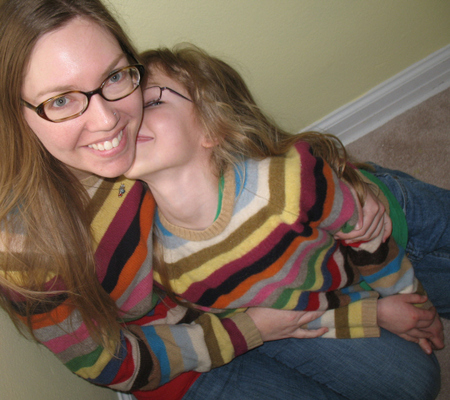 My daughter and me

She is slightly bigger than me. I never imagined that! Taller, bigger boobs, feet, etc. But we’re still pretty close in size, and share clothes.

We also share a super intimate, platonic relationship. She’s my top priority. We’re both proud of each other, and we’re both moody and crazy women. We share an unconditional love; accepting each other for who we are.

She is fine with me being a super slut goddess, and I am fine with her being a panromantic graysexual.

So last weekend, when I needed to attend a SEX+STL roleplay talk at Shameless Grounds, I told her I was going to the talk and would be back in a couple hours.

She immediately piped up, “Oh can I go?”

I said, “You don’t understand. This is SEX roleplay talk.”

She snorted. “Of course I understand. Why wouldn’t it be about sex if it was one of your events? I’m curious about these things and I think I can handle it.”

So we both went.

I let the leaders of the talk, Mark and Bianca, know she was coming. I knew they would be telling stories involving me (you can read them on this blog!); they are part of my polyamory circle.

They were cool with it. Instead of calling me out by name, they referred to me as their “girlfriend”.

My daughter and I arrived at beautiful Shameless Grounds, lugging a box of almost 30 books for donation to the sexuality library, one of them being Your Daughter’s Bedroom: Insights for Raising Confident Women, by the way! You should check it out.

She and I both wore SEX+STL t-shirts. Three different people remarked that we looked like twins, sisters, etc. I was flattered, and I think she was, too!

We sat down at a table with another couple who was excitedly talking about what kind of roleplay scenarios they would be into. Teacher/student – yes. Incest – NO.

The talk started. I was nervous and excited! My daughter brought a sketch pad and drew a little bit during the talk, but mostly she stared down at her paper. What was she thinking? Was this weird for her? She loves Mark and Bianca, they are like family to her, and here they were talking about elaborate roleplay scenes involving incest, rape, dolls, prison, military school, multiple people…

I SO wanted to pipe up and comment on the scenes they were describing, as I was in several of them, but I played it cool. I didn’t want to overdo it.

After an hour, we had to leave to meet a friend for ice cream (who happens to have made the ice cream and was part of my gang bang!), so we quietly slipped out.

She burst out, “That was so cool! I learned so much! I used to think all those things were scary and bad, but now I know you can play with those things and they’re not so scary! I can’t wait to get home and write out some scenes – I need to make a checklist!”

PHEW I was so glad she felt that way, and that she was inspired! Even though she is not interested in having sex herself, she’s still curious about it and appreciates the allure of adult playtime. This is SO much better than the sex ed she’s taught at school!

After a moment, she asked me, “Mom, why didn’t you share any of your stories? I know you’ve done lots of fun roleplay.”

HA! I told her I didn’t want to make her uncomfortable, and she laughed it off.

She’s never regarded sex in general as something icky, thanks to all the good, open, honest conversations we’ve had about it.

It’s nice to know that if/when she decides to explore sex for herself, I won’t have to worry about STI’s and pregnancy. She’ll just to have to deal with other people’s attitudes about it, and possibly educate them.

Replace the fear with love!

Some people will say that you are a monster for taking her with you, but I feel you taught her a lot about herself. I would hope that a lot of parents would teach their children more about sex then having them to find out on their own.

A monster?? I guess you are right. People can be quick to judge. I wonder what the other people who were there thought about her being there. One of the reasons I wrote this post is to point out that she asked to go and I respected her feelings, and it all worked out fine. It’s important that she explore these things on her own terms.

I knew you were a fabulous mother. You are clearly raising up a great kid there. Way to go! Of course she needs to learn about sex in all it’s glory, warts and all. Anyone who thinks that the Good Fairy comes and whacks kids on the head on their 18th birthday is an idiot. The best time to tell them things is when they ask about them. If they are mature enough to ask, they are mature enough to get a straight answer and to handle the details. And at 14, while she’s clear she’s not ready to TRY any of that sex stuff, she’s old enough to ask. It is certainly better that she know about things before she is ready to attempt any of them.

Sex is a big topic; desire has a big role in the lives of children from, in some cases, a very young age; and hiding from the subject makes it more mysterious and compelling to kids. If she asked to go, and you and she have maintained open communication about sex up till now, it’s great that you brought her, and it’s great that she has this knowledge now from an honest and sensible perspective.

well done! I am sure it is a huge challenge to raise a sex positive daughter… my partner and I have been discussing this a bit lately too.. our daughter is still quite young… almost 2… but the powers of sexism and social imagery are everywhere… and there is nothing like a sex positive anything here though in Japanese culture is perhaps a bit more open than US culture in general on these issues… its still has its own down side… we want to raise a strong aware and informed child… glad to have you sharing your experiences…