My Big Adventure! Seattle and Alaska 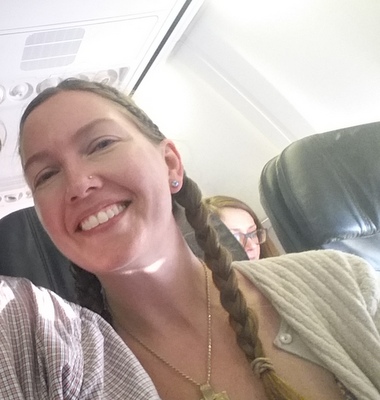 I’m now available for consulting and surrogacy sessions during the day, evenings, and weekends – when I’m not planning amazing events, making dreams come true, or organizing new religions, ha! More on that soon…

We started our summer off right with four days in Seattle, and six in Alaska – both places new to me! I love exploring new things.

And now I get to cross two more states off my list – I have 17 more to go!

In Seattle, we stayed within walking distance of the Space Needle. 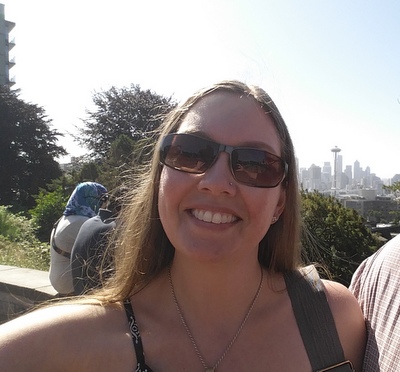 I went to Archie McPhee! And got my daughter all kinds of goodies, including Fortune Teller Cards and an Emergency Self-Esteem Kit.

On a friend’s recommendation, we ate at Shiro’s Sushi and had geoduck – do you know what a geoduck looks like? Giant, muscular phallic clam. It was chewy goodness! 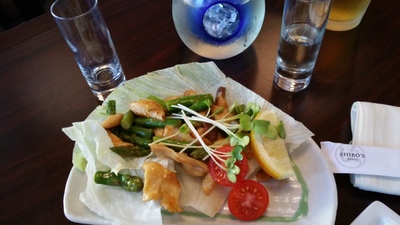 We also saw a pretty femalesque clam at the Seattle Aquarium: 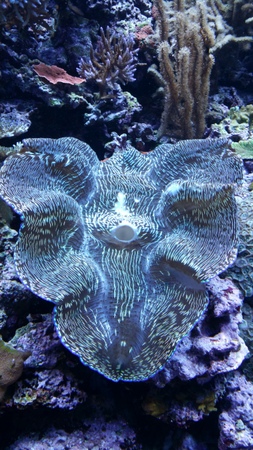 We went bar hopping, and ended up at Pony, a gay dive bar: 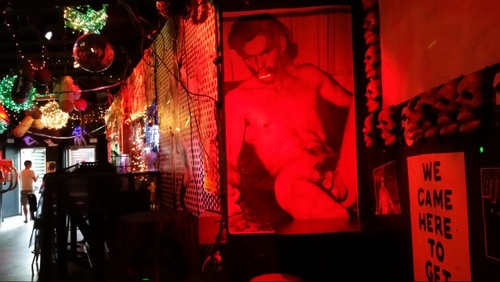 And he surprised me with a Speakeasy! 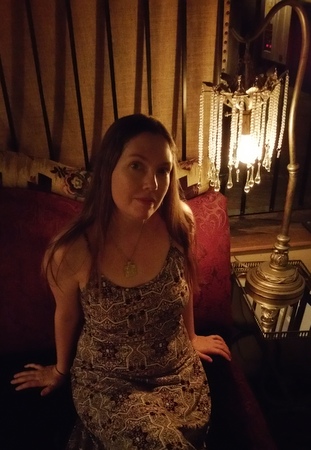 And the weed – it’s legal there, so everywhere you go, there are people smoking on the street. You can smell it everywhere. We went into a dispensary and bought some chocolate.

Seattle is very laid back, except for all the homeless people yelling and pissing on the sidewalk.

One of the highlights was visiting The Center for Sex Positive Culture. This is the organization we contacted when we founded Sex Positive St Louis five years ago!

They have some great play spaces, a dungeon, a shower private bedrooms, and more. I stripped down naked and got a wildly intense spanking in one of their medical roleplay rooms! I’m such an exhibitionist!

In Alaska, we stayed in a geodesic dome. 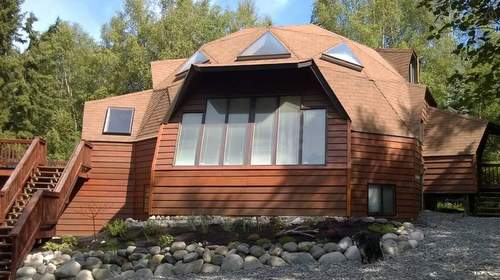 And guess what? Weed is legal in Alaska, too! So in between all the breweries, we checked out a salon called Pot Luck Events. It was very classy, like being in a bank! They let you sample for free, and sell munchies because they know you’re gonna get hungry! There was a woman walking around, passing out mini-chocolate shakes. It was surreal and amazing.

I don’t even smoke that much, but it was awesome to be somewhere where it’s not that big a deal!

We stopped at Willow, Alaska, where the Iditarod begins (after its Anchorage publicity event).

I stopped to tinkle – I figured plenty of husky bitches have done the same.

Does a slut pee in the woods?? 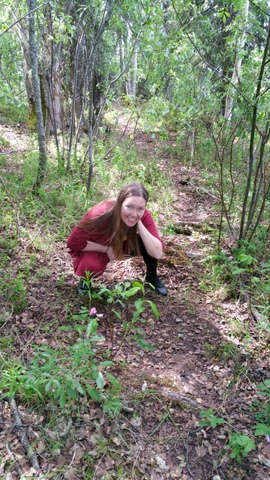 Next, we stayed in a yurt in the woods. It was so quaint, and cozy. Like a tent, but better. 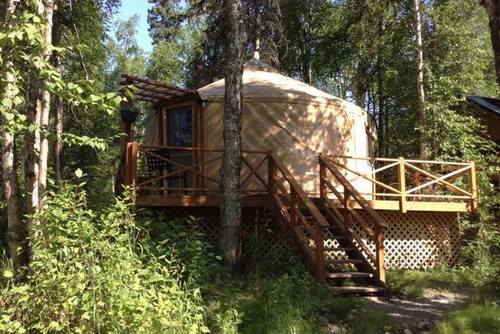 We had some sexy time in the yurt… he surprised me with some hemp rope. See how blissful I am! No makeup, pure and natural… 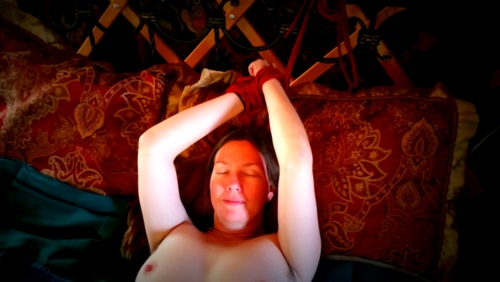 Tied up in yurt heaven! 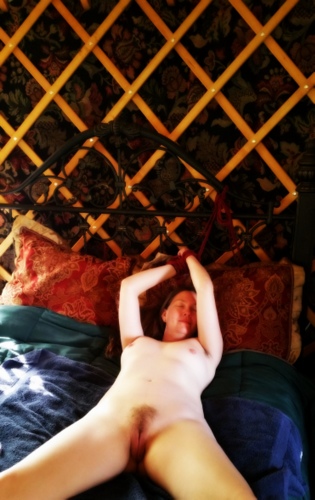 Do whatever you want…

He got me all tied up, then had his way with me. By the time he was done, I was very flushed and messy. He has amazing technique!

We walked down to the river and saw

Denali means “the high one.” Over 120 people have lost their lives climbing it.

Here it is during the day: 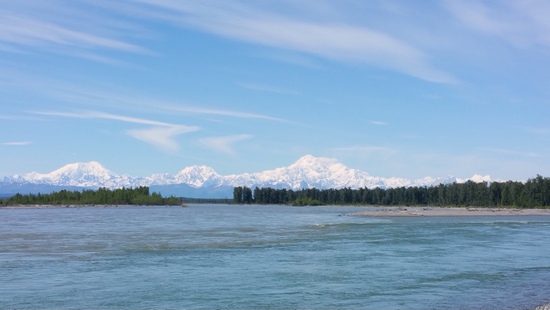 Denali during the day

And here it is at midnight: 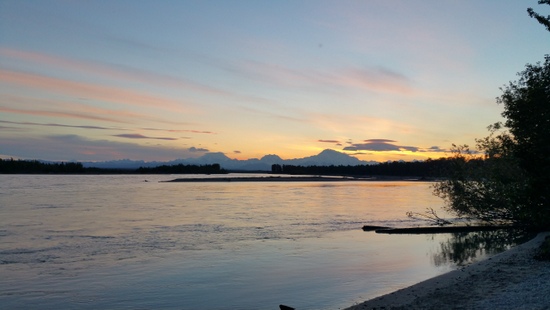 The sun sets around midnight, but it never gets dark. And then it rises again about four hours later!

We were lucky to see Denali during our entire trip. Oftentimes, it is obscured by clouds.

We drank so. much. beer. 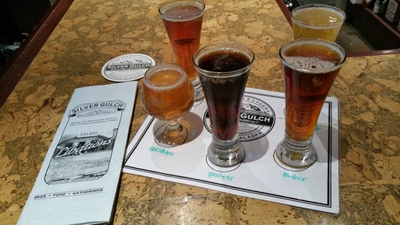 I blame HIM for my beer belly. He FORCED me to drink all the beers. He said it was for my own good. (Stockholm Syndrome.)

We visited Denali National Park, where we saw a sled dog demo. So cool!

Finally, we stayed in an amazing cabin on a supremely mellow sheep farm, nestled in a dreamy, bucolic valley near Fairbanks. 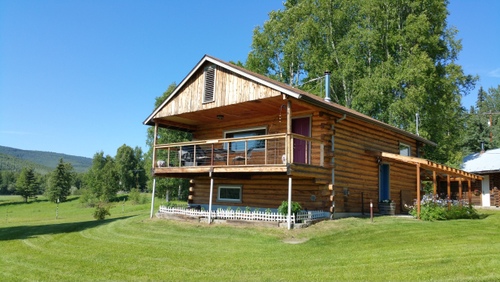 I wish we could come back during the winter and see the Northern Lights sometime!

OMG I have to see the Northern Lights before I DIE. But maybe when I die, I’ll be IN THEM. 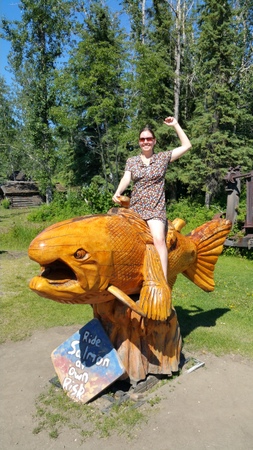 And ate some, too. He grilled it up from the hippie co-op, and it was DIVINE. (Do you ever notice how all those stores have the same smell? Incense? Yeast??)

We even visited North Pole, Alaska!

Here I am, creeping on a creepy Santa Claus mural: 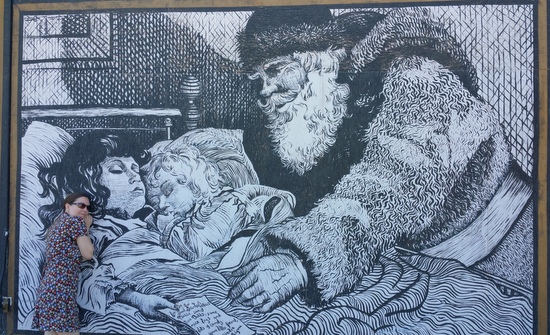 The whole way up our drive in Alaska, everything was lush and green. The weather was great – sunny and 80 degrees.

The whole way back, everything was charred, smoking, and black.

There was a huge wildfire. 🙁 It spread 60,000+ acres. They had to rescue over 500 sled dogs. I kept seeing Smokey the Bear signs and feeling sad. (If you ever want to know what my partner looks like, click here to see Smokey the Bear. I wish he would dress up as Smokey for Halloween – all he needs to do is to take his shirt off and wear the hat!)

The smell was so good, and so bad at the same time – pine burning, smoldering cinders, danger.

We got out of there just in time.

I’m ready to ignite some fires here in St Louis! The GOOD kind. The Beautiful Kind!

Let’s change the landscape – for the better!

Sounds like the trip of a life time, not many people make it to Alaska. Truely a beautiful state…great report

Waiting on his ashes. https://t.co/mqRkC6ULHP

What happens to a witch when she loses her familiar?