Jobs I Have Had

Babysitter. When I was 12-16 years old, I babysat a lot. I wasn’t very good at it. Looking back, I feel bad for the parents who trusted me with their homes and children. Sometimes they hired me so they could go on dates, but sometimes they had to work or go to school. I was oblivious to their grind. Some were rich, but some struggled. It was sad seeing them divorce. Nothing bad ever happened on my watch, but I did snoop around their house, eat their food, and made sure the kids followed the rules. As soon as they fell asleep, I would watch Cinemax softcore porn and get all tingly. One thing I did NOT do is steal, and one of the moms accused me of stealing from her kid’s piggy bank! I ran into her ten years later and was able to confront her. It still hurt after all those years. She apologized and told me it was a different babysitter – she just assumed it was me because I was younger. It was good getting closure with her.

Telemarketer. As soon as I turned 16, I got a job selling magazine subscriptions over the phone, facing a wall in a room full of cubicles. It was HELL being a clueless teenager and cold calling people, trying to make them buy something they didn’t need, and getting rejected, hung up on, cussed out. I only lasted a day. I remember thinking, “This is what having a job is like? It SUCKS!”

Salad Bar Attendant at grocery store. A week later, I got a job at a grocery store near my parent’s house, working in the salad bar. I’d sometimes go to school until 3pm, then work at the salad bar from 4-10pm. Sometimes I’d have a Sat or Sun shift that went from 530am-3pm. I wore a polyester uniform and stood in the cold back room for hours, chopping romaine lettuce, pineapples, rinsing slimy kidney beans…I worked there until I was 18, and was glad to be transferred to the bakery where things were warmer, smelled better, and there were cupcakes. During this time, I was an unethical slut and fucking around – one time my jealous boyfriend visited me on my lunch break. He put his hand on my thigh and felt the garter belt and stocking I had on under my polyester pants. BUSTED. I remember the angry flash in his eye, and how my heart raced. I lied to him that I was wearing them to keep warm, when in reality I totally had plans to cheat on him after I clocked out.

Hotel front desk clerk. When I got kicked out of my parent’s house at 18, I was homeless, so after crashing with friends for a while, I found a crappy shotgun house right on Highway 44 with an awful roommate. I didn’t have a car, so I found a job within walking distance – that hotel at Hampton and 44. It used to be a Howard Johnson. I thought it was rather glamorous – I got to work with the pretty ladies. We had one suicide while I was there – he checked in, but he never checked out. I dated the maintenance man who resembled Bruce Springsteen, but it was bad – his penis was damaged from being circumcised later in life after a foreskin injury. The management favored my co-worker who would leave me to watch the desk while she did drug deals in vacant rooms, so I got frustrated and saved money as best I could in order to buy a car. 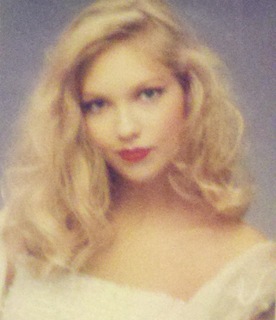 My hair color is “Starlight Blond”

Stripper. By 19, I had saved enough money to make a down payment on a Geo Metro, so that gave me new freedom. I immediately drove over to the East Side and got a job as a stripper. It was one of the worst years of my life. I was in no way mature enough to handle this level of depravity and sadness. I’ll post separately about this experience. It also blew my mind – I made money and felt rich!

Certified Nurse Assistant at a nursing home. When I was 20, I bravely quit stripping for good and decided to go into Nursing. I got a job at a nursing home – the pay was terrible, and the work was grueling and depressing. I would sometimes work from 3pm until 7am the next morning. On my first day, a woman with Alzheimer’s burst into the break room, raving and nude. I was shocked! Little did I know how horrifying it would be – watching people wither away, stripped of dignity, being dragged down the hall by my hair by an agitated resident, people abandoned by their family, dying left and right… one night a woman died and an employee broke her finger to steal her ring. The facility was put on lock down until the ring was found, tossed in a potted plant. I moved in to a trailer home with one of my co-workers, but he expected sex as part of the rent, so I moved out a month later. I was raped by another co-worker who said he would help me find a new place.

Certified Nurse Assistant at a hospital. I quit that place at 22 to work somewhere else, but it was a different kind of hell. I took care of people whose butts rotted out from under them, people with no sternums, people dying of AIDS, puking up blood… one evening we admitted an unconscious, waxy yellow woman. An hour later, I walked into her empty room at the end of the hall and discovered her dead. She had died alone.

Certified Nurse Assistant at a Pediatrics ICU. My back was so injured from lifting heavy adults, I decided working with kids would be easier, and it was physically, but not mentally. I encountered a toddler who drowned in a ditch but was still breathing, but brain dead. I took care of a baby who was born without a brain – her parents kept her alive with a ventilator and talked about how she would go to kindergarten. There was a toddler who tried killing her infant brother, but it backfired on her and she ended up with 2nd degree burns on 2/3 of her body. I would run blood from the blood bank for a boy dying of leukemia for days, and he would die anyway. We saw Orthodox Jewish boys with anorexia, teen girls with colostomies, abandoned babies with respiratory infections, kids mangled in car crashes.

Children’s bookseller and event coordinator. I took a big pay cut in order to escape the hospital hell. I was SO glad to trade changing burn dressings for gift wrapping limited edition volumes of Shakespeare. I loved frolicking around the bookstore – I was Queen of the Children’s Department. I became quite an expert and librarian. I organized and hosted fun events, fondled books galore, dressed up in costumes, made pretty displays, worked with authors. It was retail, which meant I had to deal with people, but my god did I have perspective – when someone freaked out about a missing book, I would recall all the suffering and loss of life just down the street. I did this from 23-28 years old. It was a dream job.

Motherhood, Office Coordinator, Telecommuter, Writer, Project Manager, Escort, Personal Assistant, Figure Model, Sales for a Lab, Sex Surrogate, Gynecological Teaching Associate, Consultant, Fetish Worker… the list goes on, and gets more and more complicated? Creative? OH and I forgot about that job I got fired from for having this blog!

I’m glad I no longer work in an office – those gigs are pretty sucky. It’s nice not having to deal with petty co-workers, dress codes, a set schedule, insulting pay, moody bosses, grey cubicles, and fluorescent lights.

Very fascinatining, Kendra! When you know someone, it’s possible to see how they are shaped by, and enhanced by those various experiences. In my work in health care, I often ask people what type of work they do, or did, partly because it gives some insight into how to communicate with them, and also because it’s often fascinating to talk to people about their varied careers and paths. I’ll give my list, and it would be interesting to see others – grass cutter, farm worker, window washer, laborer, fireworks sales, amateur magician, amateur musician, sorority waiter, public park worker and landscaper, roofer, drywall hanger, doorman/bouncer, bartender, EMT, hospital transporter, lab assistant, darkroom attendant, physician, -?-

WOW that is quite a list! Jack of all Manly Trades! 🙂
King Warrior Magician Lover…

wow, you went through so much to get where you are. Your life right now is a just reward. Thanks for sharing.

Of course I enjoyed reading all of it, but the babysitting job and being accused falsely of stealing particularly struck me. In my 40s I worked with a man who was nearing retirement, and he’d had a good life and productive career. One thing that stood out for him was the experience of being fired from a job in a bank for stealing when he was in his 20s and had a family to support. A couple of thousand dollars in cash was missing, and the bank had all employees with access take a polygraph test. They said he failed the test and fired him. Of course he didn’t do it, or he wouldn’t have been telling me 30 years later about how being unemployed and unemployable in his field for something he didn’t do still hurt so badly. I’m glad you resolved your longstanding hurt in some way. She really should have reached out to you though, and much sooner.

Me with my dad this morning, me in the afternoon, about to charm a client as a dark fairy goddess. I’ve hardly been… https://t.co/bboDfRnVek

Dad this morning, mugging for the camera, wearing his “THUG NOTES” shirt, eating bacon & flirting with the ladies.… https://t.co/NnkU4xmCVU

(Dad is resting comfortably in this pic, I took it last week) As a funny joke, I sent to family saying, “OMG, they… https://t.co/qgHKXqEEoE