Is Shame Ever a Good Thing? 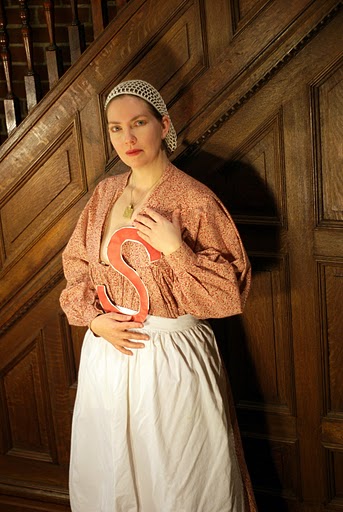 A for Adultery, S for Slut

The other day, I was interviewed for a new NPR podcast. Not sure if it will ever air, but the topic really got me thinking. The question posed was:

“Does shame do any good?”

Given my background, my knee jerk reaction was, “NO.”

After all, I’ve been slut shamed to the point of being fired and sued.

But the question wasn’t, “Does slut shaming do any good?”

“Shame” is humiliation caused by wrong or foolish behavior.

We often feel shame for who or what we are, but we have to ask ourselves – is who we are or what we are doing wrong or foolish behavior?

The woman who fired me certainly thought having a sex blog was wrong and foolish.

I’ll never forgot how livid she was as she hissed at me, “What were you thinking when you posted those things for everyone to read?! I feel like I’m talking to a 14-year-old!”

(For the record, April 27, 2010 was the last time anyone ever successfully slut shamed me.)

Maybe she was a conservative Christian and thought I was guilty of Lust and Pride.

So, what is wrong or foolish behavior?

Is accidentally getting stuck in the middle of an intersection and blocking traffic at a red light wrong and foolish behavior?

Is wearing sweatpants to the grocery store wrong and foolish?

Is your phone going off in the middle of a concert or lecture wrong and foolish?

Is eating a package of Oreos or drinking a bottle of wine wrong and foolish?

Is sleeping through your alarm and missing your flight wrong and foolish?

Maybe. Is it the sin of sloth?

Is losing your temper and screaming at your annoying kids wrong and foolish?

Maybe. Is it the sin of wrath?

What if your kid does something terrible – steals or cheats or hurts somebody?

Can you think of a time when you felt deeply ashamed?

Embarrassing memories come easily to me – I was either mortified at the time it happened, or feel a flush of regret in retrospect.

Does it make a difference if your actions are accidental, or intentional?

The more people who are ganging up and shaming you, the worse it is.

Monica Lewinsky can tell you that.

We all have standards and judge other people. There’s a book I’ve been wanting to read called So You’ve Been Publicly Shamed, by Jon Ronson.

Is it okay to shame children in order to teach them a lesson?

Do you have a bad habit you’re ashamed of? Drinking, smoking, gambling, drugs, being a slob, chewing your nails? I feel shame about my bad habits – I pick at my fingers when I’m stressed, and sometimes I drink too much.

Are you ashamed of how much money you make, or your job? As a self-employed sex worker, I make more money than I did at my desk job, and I’m proud of that, but a lot of people think sex work is a shameful way to pay the bills.

Would you feel ashamed if you had genital herpes? What about it if you had some other kind of virus that wasn’t sexually transmitted?

Do you feel ashamed about your sexuality or your fetishes?

My friend Sissy Maid isn’t. You can read more about him here and here. He’s a very sexually creative person, and just one of the things he’s into is dressing up in a French Maid costume and cleaning his girlfriend’s houses! I LOVE IT!

Not everyone loves this kind of thing, however. Check this out – the other day he accidentally texted the wrong phone number. Look what went down: 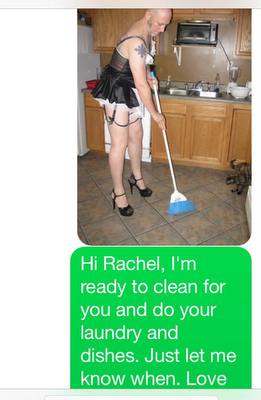 Sissy Maid is such a good sissy! 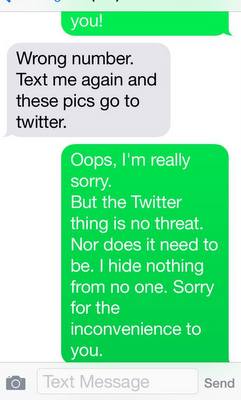 I hope Sissy Maid inspires you to embrace and proudly own your fun fetishes – that jerk thought he had the upper hand and was ready to publicly humiliate Sissy Maid, but you can’t very well out someone who is already out!

The more people who are open and matter-of-fact about their sexuality, the less of a big deal it will be.

I truly believe that someday, our society will understand that sex is a playful, creative process and a healthy outlet when enjoyed in a safe and consensual manner!

I was going to say something similar! Brené Brown is a GREAT writer and speaker on the topics of shame and vulnerability. I can’t remember if it was in her TED talk or one of her books, but she said (paraphrase) “guilt is saying ‘I did something bad’, and shame is saying ‘I AM bad.'” So yeah — shame is never productive. Guilt is good because it allows you the possibility to be a better person. Shaming someone, or internalizing shame about yourself, is a dead-end road. Not healthy.

I listened to the Strangers podcast today with your interview. It was pretty great, imo. You came across as intelligent, confident, & happy. I’d love to ask you some questions sometime, if possible. Keep doing what you love & good for you!

Thank you so much! Feel free to contact me to schedule a consult. http://www.beopenandhonest.com thank you!

But it seems socialized in early, by the tween years. By freshmen year of high school, girls are slut-shaming each other. It seems males have their own role in it as the threat, either of rape if a girl is too sexual, or of social isolation, and sometimes of both.

I think it has to do with the ambivalence adolescents face about sex. That for some, when the hormones first hit, there come into being unwritten rules on how to deal with their sexual feelings socially. These unwritten rules are most often gleaned from the parents, who don’t have the same interests in it as their daughters. I remember my sister had a statement about “sleeping as restfully as someone whose daughter is not being impregnated that night.” Parents tend to necessarily conservative about their daughters’ burgeoning sexuality. They would much rather their daughters be asexual until they’re married, e.g. until it’s somebody else’s problem. That’s what gets communicated. Worse thing is: with birth control and abortion, none of this should be so damaging.

There tends to be social regulation about sex among adolescents, e.g. slut shaming, it has a lasting effect on people’s socio-psychology long after adolescence.

The males exploit the slut shaming toward their own ends. If a girl is considered a slut, her social status falls below zero, which means any lie about her becomes fair. (One horrible thing about slut shaming is often the girls didn’t do what they are said to have done. And sometimes virgins are slut shamed.) For males, they conclude that permission for sex is granted by the “slut” girl all the time for every male. If it turns out to be rape (because the most egregious males are unclear or don’t care about it) then they are metting out the punishment for the girl being a slut. It’s similar to rape being part of the “justice” in prison.

If males tend to take advantage of slut shaming, females are some of the worst slut-shamers. Also, I’ll make a note that because some girls are slut-shamed on the basis of just rumor, not on their behavior, women have different reasons for opposing slut-shaming. Are they opposing it because people lie about it? Or because they believe in having their sexual freedom without coercion and shame?

At the very least, slut-shaming blocks communication, punishes and ostracizes people for consensual sex, divides women, and obscures the difference between consensual sex and assault. Not to mention the fact, it traumatizes women, lowers their self-esteem, and easily leads to further trauma.

Speaking of which, here’s a popular attempt at social-sexual engineering by shame:

Thank you for this link! I just donated a copy of Marty Klein’s book, “America’s War on Sex” to Shameless Grounds – you should check it out! He’s coming in town late October!

Kendry, I invite you to my blog. Do you want to come (no pun intended) to my blog?
https://lonesoulofmine.blogspot.com/

I like the idea of a shame/guilt distinction, but in practice I find it hard to draw that boundary in my own mind. If I’ve done something wrong, then I feel I must be a bad person because a good person would not have done that. It seems like an inescapable conclusion. And if I do, say, feel, or think something wrong, even if rationally I know that nobody knows about it, I feel as if everyone knows and everyone condemns me. (If I were more religious, I might say “God” instead of “everyone”.) I guess maybe all I’m really saying here is that I’m crazy. :S

My cat’s rusty meow in the background as I admire my new books... https://t.co/mV9JMEfAO0

I have one 19 yr old cat left. She's the shy one. How do I best support her as an only cat? It's so dull and quiet… https://t.co/INoczWbpBZ

So many people hold their partner back, due to ego, fear, control. https://t.co/lxe0nIsN3L

I want this for my childhood bunny! He’s so matted 🐰 https://t.co/JTMs6NRZXJ