Last night my daughter and I attended a school board meeting that featured sex ed.

The school sent a survey out to parents last year. Over 1000 parents responded (I was SO excited to fill it out!), with the majority of parents in favor of updating the curriculum to include important topics beyond pregnancy and STIs, such as gender and LGBTQ issues, consent, and exploring sexuality.

As a result, the board voted and approved the improved curriculum in March. HOORAY! You can read details here.

I’m Co-Leader of Sex Positive St. Louis and I graduated from the school in ’91. My sex-positive daughter is a sophomore now. Needless to say, we strongly advocate acceptance, inclusiveness, and accurate education when it comes to the wide range of human sexuality. We were in good company, with plenty of rabbis, physicians, professionals, sex and health educators, and representatives from local organizations such as Growing American Youth and TransParent.

But some people are having a fit over the change. They think the curriculum, which draws mainly on Centers for Disease Control and Prevention guidelines for sexual education, is medically inaccurate. They also think providing information sends a dangerous message and encourages teens to have sex. Let me ask you – did you have sex as a teenager? Most of us did, and we fumbled around and made lots of mistakes. I wish I would have been better informed at that age.

Here is information detailing the improved curriculum, and here is an info page for Parents on what to expect.

People both for and against the teachings that will promote acceptance and better emotional health attended the meeting. 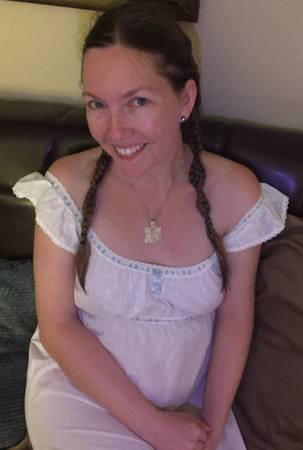 I’m so innocent and pure.

The people against the change wore white to symbolize purity and innocence.

One of the white people kept repeating the word “pornography” with such passion that it made me want to run right home and watch some! Another white person demanded that the school stick to “education, not indoctrination.”

A mom and her incredibly brave and shaking 16 year old son got up to speak – Andrew Bennett has been getting bullied and slandered by some of the white adults, online and in person.

As they spoke, some of the white people shouted angrily at them and some turned their backs on them.

You can watch footage of them speaking here. The building was surrounded by police and security.

Teen hero Andrew is saving lives by putting himself out there. I can’t wait to see him speak in front of thousands of people someday.

My daughter got to witness adult behavior – some mature and respectful, some not. I’m proud to say the people we sat with exhibited good manners. But I have to confess – as soon as we got to our car, we burst out laughing and repeated the word “pornography” all the way home.

I got compliments on my Planned Parenthood “I LOVE SEX ED” shirt. 🙂

I counsel adults mainly in the 40-70 age range who were grossly misinformed when they came of age. If the next generation gets proper education, then I can be put out of business and bake cupcakes or garden instead. Or, if we choose to remain ignorant, I can make lots of money mucking around in all the guilt and shame baggage.

I prefer the former.

I’m a little confused. Andrew Bennett, was he being bullied for being LBGT?

Pornography is becoming a rallying point. Some might even call it a hysteria point. It’s now being called a “public health crisis” by lawmakers who’d otherwise never allot a dollar to public health if they could avoid it. The same lawmakers who aren’t doing a damn thing about Zika.

For sex education: the pro- and anti- people have two intrinsically different goals. The anti-SE’s don’t care about results like preventing STI’s and unwanted pregnancies. If they did, abstinence-only would have been thrown in the dumpster a long time ago. They present their goal as doing what God wills. What they won’t admit is they’re afraid of making God angry. They see contraception and sex-ed as cheating on moral guidance. Their God doesn’t like people who cheat.

Yes, the white parents bullied him for being gay and for speaking up in support of the curriculum. They’ve posted pics of him and his friends online, they’ve called him names and mocked him, they have taunted him in person, they have told lies about him. One of the board members even had an angry parent show up at his house uninvited!

PS. I guess nobody pointed out that if white were pure, society’s most militant virgins and saints would be in the KKK.

One of my readers, a career military officer, wrote this, and allowed permission to share:
“Do We Recognize Patriotism When We See It?

In late August (2016) the Parkway School District, Chesterfield, MO, had a large community contingent at their board meeting challenging their past March (2016) decision to modernize their sex-ed curriculum to be more in line with the real world that their students most certainly encounter. A multitude of people for and against spoke. The most telling aspect was that a number of those advocating that there be no progress; that we continue to withhold needed information from our young adults, acted out in ways that demonized anyone with an opposing view to theirs. Exactly trying to shut down anyone who did not agree with their point of view.

Enter a young sophomore teen, Andrew Bennett. This Parkway student did a wonderful job speaking to the needs of today’s students. When you consider that he had been the recipient of online threats and bullying by those pushing the opposition agenda, you understand the courage it took to speak in public about this important issue.

So how does Patriotism fit into this? You see, often times we lapse into a thought process that forgets the importance of Patriotism and even recognizing Patriots when we see them. In some references, Patriotism is defined as “The willingness to sacrifice and endure discipline for the welfare of the community.” A Patriot is sometimes defined as, one who exerts themselves to promote the well-being of their country; one who maintains their country’s freedom and rights. A Patriot is one who exerts, who DOES something or stands ready to do something to further freedom and individual rights in their country.

In our recent observation, Andrew Bennett, high school sophomore, is a Patriot. In spite of being maligned by so many, bullied, and threatened, this young man DID something. He stood firm in supporting the rights of his fellow students to learn truth rather than fiction about sex in their school. He persevered through RUDE behavior by so called ADULTS to get his message across. Few there would think him a Patriot. I do.”