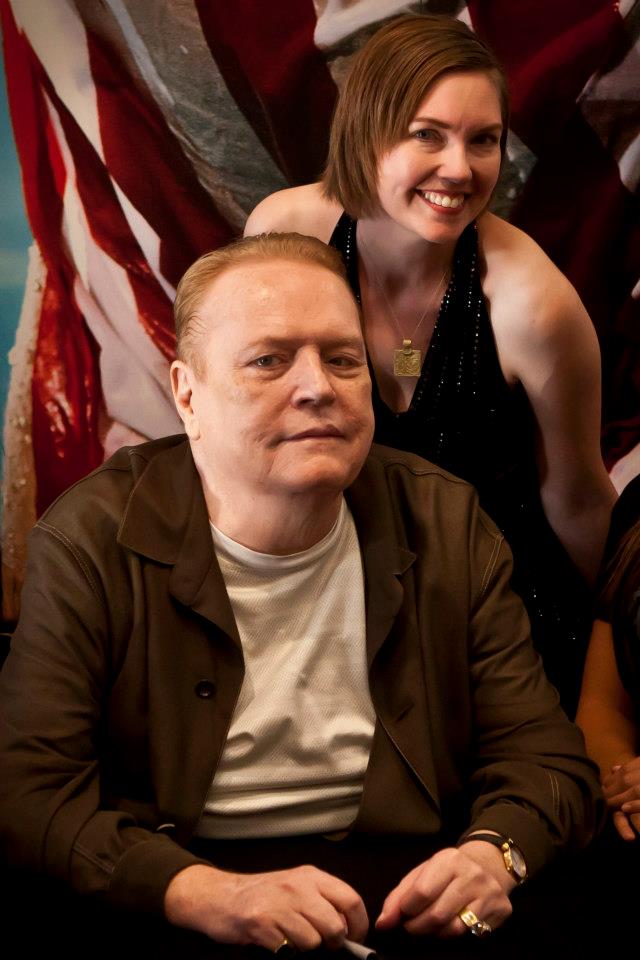 Larry Flynt and me! photo by Mike Estes

Earlier this year, I was featured in Hustler magazine.

Hustler Hollywood store threw a party to celebrate, which was a lot of fun.

But that was NOTHING compared to what happened this week! Larry Flynt visited St. Louis and I got to meet him!

I asked one of my girlfriends to go with me. “You want to be seen with a hot chick, don’t you?” she commented drily. Well, yeah!!!

With her white power suit and mirror shades, she looked like my bodyguard – a super sexy Charlie’s Angels type bodyguard.

We walked up to the store and were greeted by a bearded man handing out postcards. Upon first glance, the slick marketing material looked like it was made by Hustler, but upon closer inspection, it proved to be anti-porn literature!

In the book of Matthew, Jesus says if you LOOK at a woman with LUST you’ve already committed Adultery in your heart.

In the book of James, the Bible says that if you break only one commandment, you’re guilty of ALL of them. Breaking God’s law is called sin. Sin leads to death…

So clever of them to try and make people feel guilty for coming to an adult toy store.

There was a lot of nervous energy in the air, as well as some very interesting characters in line to meet the man/legend. 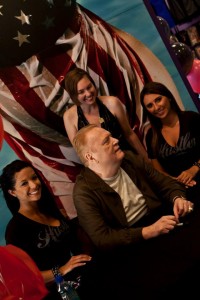 He has tirelessly fought for freedom of speech and one of his huge hobbies is pushing the envelope. He enjoys being provocative.

He was shot and paralyzed for life by a white supremacist who took issue with an interracial pictorial featured in Hustler magazine.

He did the born again Christian thing for one year, but snapped out of it.

He’s led several anti-hypocrisy campaigns, outing politicians who benefited from shaming others while sneaking around doing the same thing. His latest book is called One Nation Under Sex: How the Private Lives of Presidents, First Ladies and Their Lovers Changed the Course of American History

(paperback will be released on July 3!) I bought a copy of this book and will be donating it to Shameless Grounds sex library as soon as I read and review it.

Larry also fucked a chicken when he was a kid, and then wrung her neck so his grandma wouldn’t find out. (You can find out many more juicy details about him by reading his autobiography or doing an online search.)

The whole evening was surreal – when I finally had my turn to connect with him, I was just like Ralphie in Christmas Story when he blows his chance telling him what he wants for Christmas:

“Hi my name is Kendra Holliday I’m a mom here in St Louis and was featured in your magazine in March issue and I’ve been fired and sued for my sexuality!”

He smiled nicely and murmured, “You were fired?   for sex?”

Then I walked away, and Kevin the store manager whisked me over to Larry’s wife and daughter. They were SOO nice, I felt a really down-to-earth, female connection. When he introduced us, they knew who I was right away, and were able to cite the article (“Oh yes, the one by Matt Hoge!”)

Then his wife insisted I go back and get my pic taken with him so they could post it online. That was pretty awesome. My friend Mike Estes took loads of pics, you can view them here.

I leave you with a parody video my friend did – she’s my age, but plays this character Claudette Higgens, aka “The Neckbrace.” In the vid, you can see Larry in the background!

As far as the Book of Matthew quote goes, I never wrote that!!! They should have taken a picture of that guy and made him “Asshole of the Month”!!

Glad you got to meet Larry!!

hahahaha! I love the broach on the neck brace!

I know you were occupied with Larry, but seeing the pics it’s clear you missed an opportunity with the Hustler model to Larry’s left – who is TOTALLY checking you out. She even eyeballs your ass when your back is turned. Musta been that awesome dress.

And your friend?? Superhottness also!

That WAS a fun day!

What kind of bird sounds like this? 🎼 They have a singing gig right outside my bedroom window every 3am 😩 Thank goo… https://t.co/pDmDVcp4XQ

😡 I think going to church is a waste of time, but instead of abolishing all churches, how about I just don't go to… https://t.co/jscCpO0O4P

SW support group via zoom today Thur 3:30-5pm cst. DM me if you're interested in joining us. This group meets every Thur.

For 2 years, I've been asking doctors to MRI my dad's brain, but they've been dismissive. Finally got MRI scheduled… https://t.co/Enhp3juWqE