How Exploring A Kinky Lifestyle Improved My Vanilla Life

Ed Note: This a guest post by my good friend, Gigi Spanks!

I have always been a shy and reserved individual. I grew up in a conservative household where girls were expected to be polite and behave, and there was virtually no talk about sex. After my first sex ed class in 5th grade, my mom sat me down to watch a National Geographic episode about sex. The only thing my father ever said was, as I was on my way to college, “You better not get pregnant until you have your own health insurance.” Needless to say, I had no language or skills to know or ask for what I needed as a sexual being. 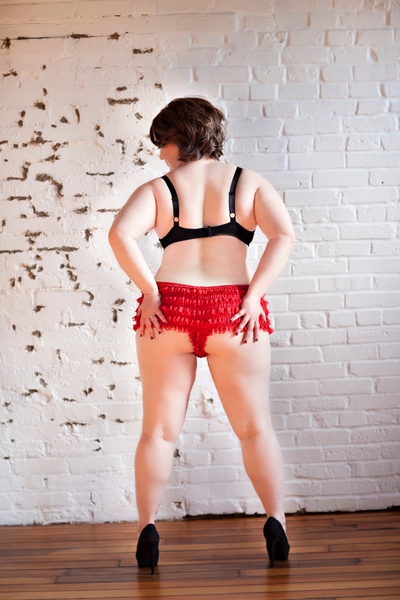 Things started to change when we found out one of our friends was a boudoir photographer. She took amazing pictures of women… I dragged my feet on going because I was overweight and had body image issues, I would go when I had lost some weight.

When I found out I was pregnant with my first child, I thought, I better go now, I will never look as good after I have kids. So I went and had one of the best days of my life. I got a make over, dressed in sexy lingerie and was treated like a princess – I felt sexy as fuck. When DH came by later that day to help select the images my feelings were confirmed as I watched his jaw hit the floor. For the first time in my life I felt absolutely beautiful!

Six months after our son was born, DH approached me about attending a play party hosted by The Beautiful Kind. I agreed with a little apprehension, as the most risqué thing we had ever done was go to the strip club and walk through the Red Light District of Amsterdam.

We decided to start out easy with a happy hour hosted by Sex Positive St. Louis, so we could meet hostess Kendra Holliday and some of the other individuals we might meet at the party. I am usually very awkward at social events, but everyone was so welcoming and friendly! We had such a great time, we decided to attend Kendra’s party.

The party was filled with 100+ people of all ages, shapes and kinks. It was so liberating to be in a space with so many nice people who were not afraid to be who they are! I will admit it was a bit intimidating, but we quickly acclimated and began to enjoy ourselves. The first time someone approached me to play, I literally fell out of my hammock. Out of all the beautiful women here, he wanted to play with me? I respectfully declined because at that moment I realized that DH and I had not had any conversations about our limits. I saw so many different couples doing so many different things, it was exciting! I realized that I wasn’t odd and got some ideas for things to try! When DH asked to suck on another woman’s tits because he wanted to see what her piercings felt like in his mouth, I was surprised at the excitement and lack of jealousy that I felt.

Attending the play party opened up the floodgate of communication between us. For the first time DH and I sat down and talked about our needs and I wasn’t embarrassed to talk about what I wanted. It would take us another four years of conversations and growing together before we finally decided to formally open our relationship so that we could explore our sexual desires. I discovered I love being flogged, and while exploring some of DH’s fantasies, I learned that I also loved anal sex. He even helped me come up with my burlesque name, Gigi Spanks! I have never felt closer to him.

I finally felt comfortable enough to start exploring my sexuality on my own. For six months, I had several booty calls and one night stands which taught me even more about myself. Through this exploration, I met my Dom, Daddy Midnight. Our conversations required me to dig deep and answer some serious questions about what I want / need sexually. I discovered that I had always been a sexual submissive, but had never had the vocabulary or skills to talk about what I needed. He taught me that respect and communication are the foundations of a good D/s relationship and that there are no limits to what I can be. I found that I love the absolute honesty and disclosure required by this kind of dynamic. He has helped me see the beautiful sexual person that DH had been trying to get me to see for the better part of a decade.

As a result of the love and support of DH, the teachings of Daddy Midnight and friendships I have made in the Sex+ community, I have finally become the confident woman I am today, and not just in the bedroom. I am a better mother because I know how to ask for what I need and have realized that I am important as an individual. I am a better manager at work because I have found my self worth and know that my opinion is important. I am a better wife, because I can share all of myself with DH and don’t keep anything bottled up anymore. Most of all, I am much happier now that I am able to embrace my true self.

Brilliantly written and inspirational. SO inspirational. And I’m a single male! I still and continuously struggle with self worth and self image, and I wish I could go through what you have.

I can’t believe I live in California (Central Valley) and we have NOTHING like Sex+ StLouis. You have 4300 members!!! That’s amazing!

So proud of what you’ve become Miss Sparks, and so happy for your close marriage. And of course many thanks to Kendra for all she’s done for people in St. Louis and beyond.