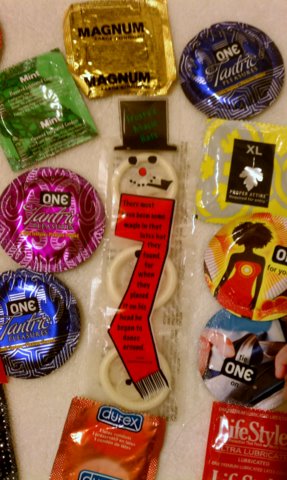 Update: St Charles STI testing services got canceled a few years ago. The best place to get tested in my opinion is Planned Parenthood, or mail away kits.

Since I have lots of awesome sex partners, I make it a habit to get tested for STIs quarterly. It’s much easier maintaining good sexual health when you are open and honest about your sexuality!

I love my sex partners, and I love myself. Also, as a parent, I owe it to my daughter to play safe!

There are several options for STI testing (see “sexual health” on Sex Positive St. Louis Links page), but my go-to clinic is St. Charles County Division of Public Health. You can get tested for HIV, hepatitis, gonorrhea, chlamydia, and syphilis – for $10. Not $10 each, but TOTAL PACKAGE. You can’t beat that! (they also test for herpes for an additional cost, but there has to be a visible sore for them to take a culture)

My friend just got tested at Planned Parenthood and it cost her $170! I think they operate on a sliding scale.

Here’s what you can expect from the St. Charles County Clinic:

– It’s small and efficient. You won’t have to wait long – they have a policy that if you’re more than 10 minutes late, you have to reschedule.

– They aren’t open on Fridays.

– The metal chairs in the waiting room are cold and hideous. They also have a television that broadcasts scary public health messages.

– Sometimes you run into interesting characters and you can’t help but wonder if they have cooties. You’re not allowed to bring your kids along.

– The women working there are pretty nice, but they can sometimes come off as judgmental. One time one of them asked me, “How come you come here so often?” I replied, “Because you have a big sign that says “TO REDUCE THE SPREAD OF STD’S, GET TESTED OFTEN.” Duh!

– If you attempt to use your cell phone during your visit, they will kick you out for being rude. They have warning signs posted everywhere.

– They take cash or check only. No credit or debit cards.

I got tested today. They asked me a bunch of questions. When asked when my last menstrual period was, I was so excited to report September of 2012! And that I won’t ever have another period again! Since I no longer have a cervix, they had me pee in a cup instead of swabbing my innards, but they still took a look at my pussy and checked for yeast and bacteria. I was clean as a whistle! I also asked what my vagina looked like without a cervix, and the woman told me it’s like a drawstring purse.

Put your penis in here for safe keeping! 😉

Thank GOD I was clean and free of blemishes, because I saw this poster hanging on the wall, and learned about an STI that was new to me – have you heard of this one?? 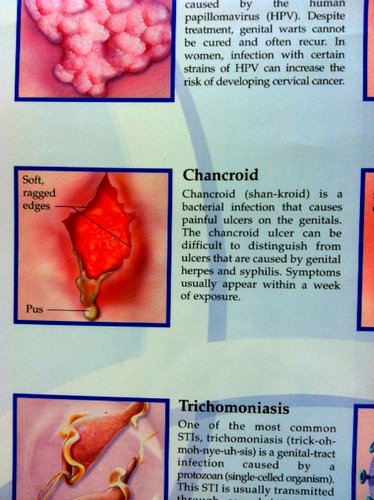 GOD I hate pus. Pussy is SO much better without pus! Right?!

They also did a blood draw, which was done expertly.

I was glad to see this sign in the bathroom: 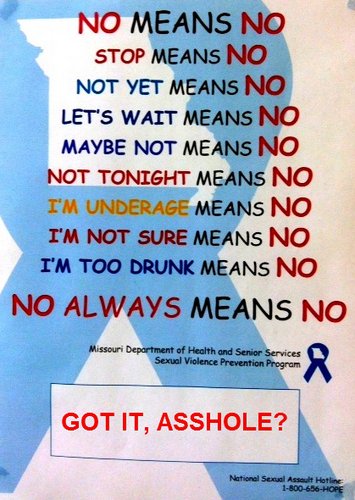 (I took liberties and added the “GOT IT, ASSHOLE?” part myself. They had a blank space for you to customize.)

I go back in two weeks to get my results. They won’t tell you HIV status over the phone.

They have awesome deals on condoms! They sell female condoms 3 for $1, a dozen Magnums for $2, and a dozen Trojans for $1!

I stocked up on as many as they would let me buy.

In fact, I heard of that one back in the 1980s in my brief stint in the Navy. They warned you to get in right away if you have it. They made it sound as painful as they made that picture look. It’s not transmitted very often, because anybody with one of those sores is in no condition to have consensual sex. It’s strep bacteria, which is some of the nastiest stuff on earth, and it can progress fast. I don’t even want to think about the consequences of ignoring it.

Lol. in fact, Monty Python mentions it in the Medical Song at 0:13.

I’m poor so everything at Planned Parenthood is free for me. I was just there yesterday…total STI screening free.At other times when I’ve been working, I had to pay something but it wasn’t much.

“they also test for herpes for an additional cost, but there has to be a visible sore for them to take a culture”

I find this confusing. There are also blood tests for herpes which can be done at any time. These can also tell the difference between type 1 and type 2. The thing the blood test can’t do is determine the location of infection (ie oral vs genital). And of course if you have an outbreak to culture, then you’ve already determined the location.

The only time I could see this test being more helpful than a blood test is if it’s a person’s very first outbreak, as it takes a couple weeks for antibodies to show up in the blood. But even then, I believe from my readings that a culture test can still give false negatives.

That’s just how they do it at this clinic. I’ve had a blood test for herpes with next day results at http://www.anylabtestnow.com/ . At the time, it cost $50.

Do you have to be a Saint Charles resident to use their services? How far in advance are they making appointments?

No you don’t have to be a St Charles resident. They usually book about a week out.

Is this the same “St. Charles Health” testing place that wound up costing the St. Charles Christmas Tooth Fairy her regular holiday gig because SHE was too rude? (For dropping a profanity after botching her attempt to have a urine test by flushing?)

I forget the details of the Sugar Plum Fairy being fired for saying shit, but I was definitely on her side and was excited to see her do a cameo in the Ambassadors of Harmony show. I’ve also been fired for unfair reasons (having this sex blog), so I can relate!

i would also recommend south county health center. it’s on lindbergh next door to two of hearts banquet center. it could not be any nicer, brighter, cleaner, or more professionally run. and it’s totally free, but will take donations. i think it’s only on friday mornings if i remember right. first come first serve. in theory you have to be a county resident, but they have never asked me for any proof, so i fudge it since i now live in the city with my old county address. i give them a donation. i am sure there are other great places, but once you find one you like it’s hard to change.

I’m really glad I live in Canada now, I just went to a clinic the other day and everything (as always) is free. The staff at sexual health clinics here are always super nice and I’ve never felt judgement for being bi-sexual (something I can’t say when getting tested at a regular walk-in clinic) Looks like you’ve found a really good one though.

Great info here, Kendra. This part made me laugh out loud: One time one of them asked me, “How come you come here so often?” I replied, “Because you have a big sign that says “TO REDUCE THE SPREAD OF STD’S, GET TESTED OFTEN.” Duh!

Glad to hear all is well!