Gods of the Arena Party Recap! 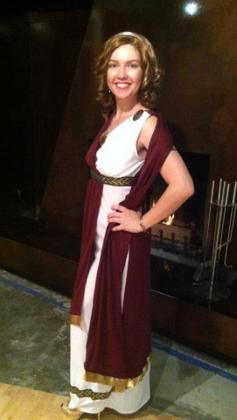 I loved dressing as a Roman Empress!

Our first upscale swinger party in St. Louis was a huge success!

I’m so glad, because our gracious hosts Kitty and Hans Von Heller spent a lot of time planning and prepping, and it really showed.

At one point, I changed out of my empress gown and into a shimmery gold silk robe that I left open in an effort to cool down. I felt like a goddess all right, striding into a room in my gold heels, robe billowing, exposing my creamy, curvy body. One guest commented, “She needs to update her profile pic, her hair is much longer and curlier now.” His partner replied, “She’s wearing a wig!”

I managed to meet almost everyone who attended – 20 couples and a few single women. I didn’t know more than half the people, which was so much fun! When I asked them where they heard about the party, most of them said from my blog. I was surprised – I have no idea how many people read it these days.

I went with Matthew, Lana, Phoenix and Homer. I wish I could show you pics of their costumes! Phoenix was a Spartan Queen. Homer was King. Lana was Head Slave – she went around the party carrying a tray of condoms and lube! (see below)

We had live drumming and rope demonstrations. A couple of games were played, such as picking someone’s name and then spending seven minutes getting to know them in private.

As it got later, the five of us retired to a mattress in the back room. I was lying back with Phoenix while Lana ate my pussy. Matthew was using a folded towel like a flogger and was smacking Lana on the ass. She was loving it, we were all in the moment – when all of a sudden a guy came up to Matthew and interrupted him mid-swing.

He said, “I don’t mean to interrupt, but could you come help me out with something?”

Matthew just stared at him, incredulous.

First of all, the word “but” means “whatever I just said is not true.” 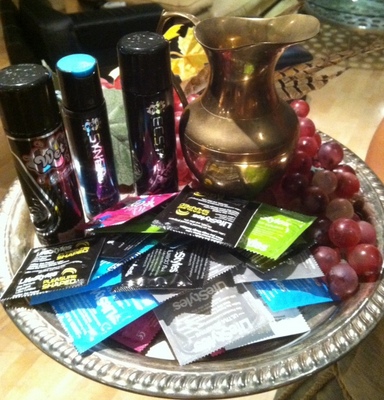 Condoms and lube for the guests!

Later we wandered around and saw a few other hot scenes like that – couples on the couch, bent over the pool table, using the sex swing…

And you better believe the hot tub was used all night long!

I wish you could have seen all the awesome costumes – just about everyone dressed up and were so clever and beautiful about it! It really felt like we were in a Roman arena, surrounded by Gods and Goddesses – flowing white robes, togas, grapes, swords… The vibe was great – everyone was so nice and friendly!

If you attended the party, I would love to hear from you, either in the comments below or in a private email. Did you have a nice time? Was it how you expected it would be? What did you like about it? Did you see or do something sexy while you were there? What would you like to see done differently the next time?

Because guess what – there WILL be a next time. The next party is slated for Dec 1. Check the website soon for theme and details!

That wig is fantastic. You always look beautiful but, wow.

It’s a short distance from Roman decadence to swinger nirvana – let’s try a Pilgrim/Puritan theme next time for a little more challenge. 🙂
Seriously, it was an awesome event – cool hosts and fascinating guests. Thanks everyone for your energy!
Regards,
Kat&Mark – a.k.a. the barbarians (just wait until 476 A.D. you Romans, THEN we’ll see who’s on top!)

You are funny! Thanks for checking it out, your costumes were great! And so was watching you in your natural element…

Wait! Wait! What is that “something” the guy needed help with? Or the woman at that earlier party for that matter? Seriously, for what kind of assistance do you interrupt this sort of activity? Did they need someone to jump start their car? Were they having trouble with a zipper? I’m going to be wondering all day.

Funny! Hubby and I were wondering the same thing lol.

The woman wanted me to help get the computer going so everybody could look at pictures of her. (For privacy issues, I won’t describe the most recent interaction.)

The recent interaction was for a similar reason.

The party was fantastic. Cool people, great atmosphere, laid-back fun all around. There was nothing seedy to make you wonder what you’d gotten yourself into, and no immature “Quagmire” types lurking in the corners.

I loved the idea of the 7-minutes game. It took all of the awkwardness out of approaching someone you’d only had cursory conversations with. I just wish it had started earlier in the evening!

Maybe next time have a fantasy board. Write your fantasy on a 3×5 or post-it note with your name on the back. Anyone who wants to help fulfill that fantasy can take the card and come find you. Another possible way to diffuse that awkward conversation. 🙂

The party was a fantastic evening, so many great people! We were glad that most everyone was in costume. You never know when you dress up for something if everyone else will as well.

The party was amazing! We can’t wait till the next one! We will be in attendance! I like the fantasy board idea. I’ll suggest that!!!! It was great to feel welcomed and accepted into the lifestyle, even though it was a first event and meeting. Everyone brought great energy, and mood to the party, and no one discriminated on body types or styles. Everyone was so respectful with adding no pressure, but yet so willing to mingle if wanted. It was way better than we anticipated, and we saw some amazingly sexy things! (whoever interupted was seriously not thinking)!

I was gonna say Casper but yes this ⬇️ https://t.co/wlKs9eh4X6

The movie The Notebook is the worst. Also, I match the movie. 😳🤢😬😝 https://t.co/5eJmOk1lKy

Surprise ran into my most elusive sibling today at CVS! 🦌😮 I was buying some vitamin D. 😁 https://t.co/rUqEawwtMw