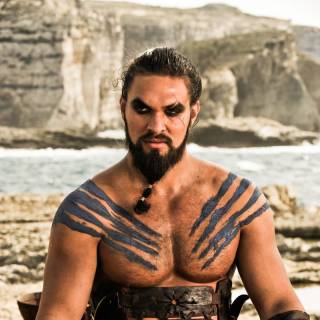 I didn’t mean to, but I got obsessed with Game of Thrones.

I try to avoid television series – they’re too much of a commitment. I hardly ever have time to sit around and watch TV – in fact, I don’t even have a TV, but I do have a laptop and a partner who likes his big TV. Also, it’s his fault I became a GoT freak – he turned me onto the show.

Here are the series I’ve tried:

1. Sex and the City – I watched all of them, and am embarrassed to admit it

2. Six Feet Under – didn’t make it to the end, bailed when the gay guy got robbed

I can’t stand blood and guts, so I avoided GoT, but finally my partner convinced me to give it a try. “There are some really hot scenes,” he cajoled.

Yay for whores and brothels and group sex! 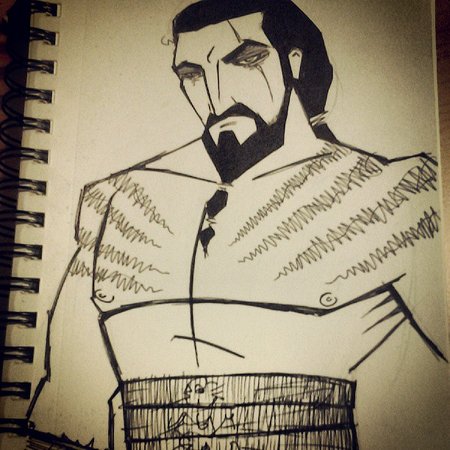 Oh sure, I jumped up a couple times and had a fit and stalked out of the room when shit got too crazy (“WHY DO THEY HAVE TO KEEP CHOPPING OFF HEADS!”) but I found my way back and have watched all three seasons. Now I’m going back and watching the first season again.

AND I’ve read all the books, and have the illustrated edition, and the big book of history and lore. And I listen to Radio Westeros and Nerdettes GoT Recap podcasts. And I watch loads of YouTube channels such as Emergency Awesome.

I’ve told my daughter all about the show (there’s no way she can handle the violence – she won’t even watch Poltergeist with me), and told her proudly that I am the mother of a dragon (she was born in 2000).

I like comparing all the characters to people I know in real life. My sister reminds me of Dany (she has a crush on the Hound). My partner reminds me of Khal Drogo in spirit, fierce and protective. But he reminds me even more of Ned, due to his heightened sense of justice and scruffiness. (My friend Shawn Gaston has been sketching the characters – so far he’s done seven, all featuring different styles. I’m impatient for him to draw Dany and Drogo.)

It’s tapped into my fantasy kingdom fetish, so we’re going around calling each other “my lady” and “my lord”. I guess our house sigil is of a bear eating a pussy, on a banner of burgundy and gold.

I get off on all the loyalty and passion. I like how there are no clear good guys and bad guys – everyone is fallible or reveals a glimmer of goodness. Well, except for Joffrey. I like how the author gave some characters really dumb names. I heard the name Arya is growing in popularity.

I’m so excited to go to Vienna and Salzburg next week and see the castles and armor museum and all that royal majesty business. The books are such a pleasure to read – sometimes I’ll zip through a paragraph and have to go back and read it again more slowly, savoring it.

Speaking of, I find it fascinating how Drogo and Dany fell in love, and how hot he was for her when she was pregnant, and how he would fuck her constantly and quickly. Hey, premature ejaculation makes sense when you’re a warrior on the go.

Obsessions are so much fun! And being able to share it with others. My partner and I watched them all together. Ever gallant, he would scout ahead, and usher me through the gross parts.

One of my fantasies was to watch the show while bound, so we did that one night after the meat cleaver spanking incident.

Here I am, draped in a robe: 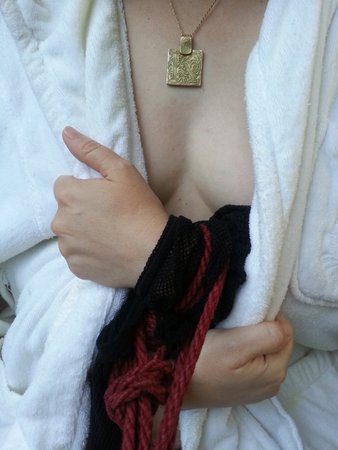 It was a quick and dirty tie – my ripped fishnets got in there too: 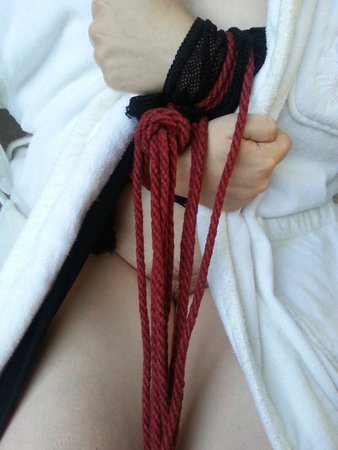 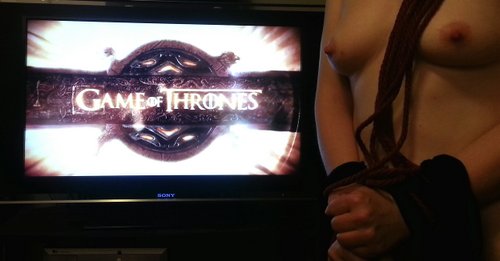 2017 Update: Still obsessed. Daughter has watched the show. I’m rereading all the books. Rinse and repeat.

And here are the series I’ve watched since then:

Call the Midwife, Great British Baking Show, the new Anne of Green Gables, MST3K, The Crown, Grace and Frankie. I had to bail on Mad Men, it was too dark.

I STILL haven’t watched House of Cards or Breaking Bad! Would also love to see Handmaid’s Tale, though I hated the book in high school. Would be interesting to reread it.

I love GoT, too! Just finished the fifth book. The series is good, too, but not nearly as good as the books.

I hooked up with a guy who was just about the spitting image of Khal Drogo. Tall, muscular, dark, long hair, cool accent… aww yeah. When I told him that, he called me Khaleesi. 😀

Speaking of your house sigil, have you heard or read the lyrics to The Bear and the Maiden Fair?

Yesterday, I attended two lectures on dementia. I also spent hours writing about my mom, and then I wallowed.

I always reassure my dad that I will be there for him until he doesn't need me anymore. I think about how when some… https://t.co/TehKV87VaR

Here is a list of relationship value items. Which are important to you? Are you getting your emotional and physical… https://t.co/NEPWOY6L3j

FYI if you're interested in feminizing your voice https://t.co/NkdekgDiiG