Don’t Be A Stranger

Lea Thau is obsessed with my IUD.

At least, that’s what I initially thought when I listened to our interview on her awesome national podcast, Strangers.

A few weeks ago, she was in St Louis teaching a storytelling workshop, and I invited her over to my cute little fairy cottage to learn more about what I do for a living. Or, as I like to say, a loving.

Here is the interview!

We chatted for over two hours. It was late, and we were both tired, so I was worried I’d sound like a zombie or something, but I think it turned out well! Lea has mad editing skills, that’s for sure.

One thing she mentioned more than once was my IUD. I gave her a tour of my house, which included a brief tour of the dollhouse I bought with stripper money when I was 19. I love it SO much. It’s full of treasures and memories. 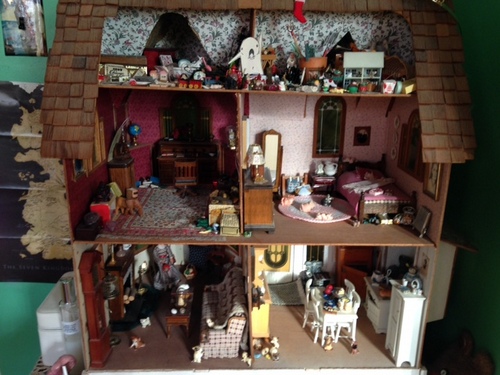 The house that stripper money built.

There’s a kitchen, living room, bedroom, study, and attic. As you can tell, Granny is a bit of a crazy cat lady, but notice how there are no animals in the study. That’s because it’s haunted. 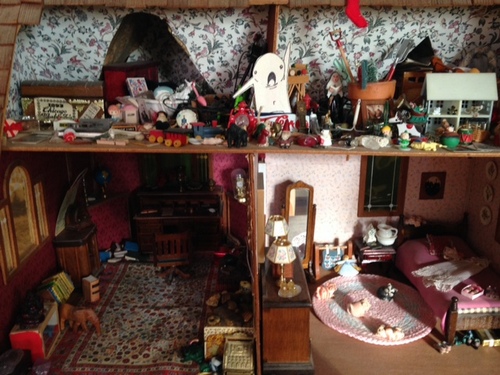 If you take a closer look at the attic, you’ll see all kinds of oddities. 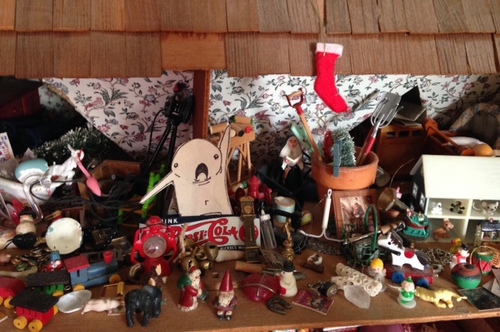 The attic is so weird!

If you start with the cute silent shrieking spirit in the middle (my daughter drew that), and pan right, you’ll see my IUD – it’s propped up next to the Civil War portrait, underneath the red stocking. I used it for a year for birth control, and when I had it removed, I asked if I could keep it. They said sure! Right below it, you can see an old tooth – I think that’s one of my baby teeth. There’s also some shells from a beach in Florida, a nun lurking, and to the far right, you’ll see the dollhouse that’s in the dollhouse!

One thing that got cut out of the interview was a quote I shared with Lea from the book The Sacred Prostitute. Here it is:

The stranger who came to the temple to worship the goddess of love with the sacred prostitute was in ancient times viewed as an emissary of the gods, or even the god in disguise.

The archetype of the stranger functions in a similar manner in the psychological process. It is an image found often in myths, religion and fairy tales, as well as dreams, pointing to an aspect of the unconscious which breaks through into consciousness to instigate change. 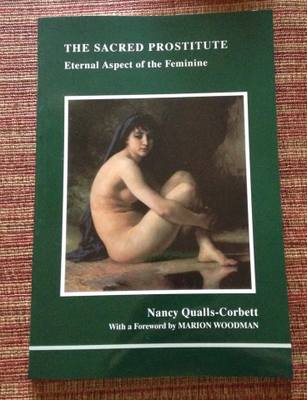 I love what this says – not only am I channeling god in my work, but my clients are godlike themselves, as they bravely seek self-discovery.

I believe in worshiping our bodies and souls, as opposed to some mysterious deity. God is within us. I have a dream of creating The Church of The Beautiful Kind. There are so many controlling churches out there that instill fear and hold people back – why not have one that believes in people at their core and promotes sex-positivity? Too often in our society, sex is considered “bad” and religion is considered “good,” and they aren’t allowed to intersect. I say we merge them and embrace the sacred feminine. I feel most spiritual when I’m having sex – my bedroom is my sanctuary.

I’m grateful for the podcast – I’ve had SO much positive feedback from all over the country! People who applaud what I am doing, who wish our country wasn’t so fearful of sex, who want to see a sex surrogate, or BE a surrogate. Lots of curiosity, questions, seeking answers.

I mostly work with people in the St Louis area, but I’ve had people travel from as far as Hawaii to spend time with me. It’s truly an honor to share intimate space with others and act as their passion midwife – I help them give birth to their sexual creativity.

You can find out more about my work by visiting my professional website here. And if you want to learn more about my fabulously interesting personal life, keep reading this blog! I just put up my 500th post – lots of reasons to celebrate!

PS: OH and if you’re a client of mine and would like to contact Lea for some anonymous feedback on our work together, you can email her at strangersradio@gmail.com 🙂

A Beautiful Kind of episode. I think you turned Lea’s head around about sex workers. I could hear her amazement throughout. And your joyfulness about your work comes out in your voice. Great interview, but too short! Half of it Lea talking. Especially at the end, she talks about eight minutes.

I think you’ll probably get a lot of attention and a lot of pushback with this. I would think you’re going to get a call for another interview soon.

BTW, gorgeous dollhouse. I think the fact that you paid for it with stripper money is worth a story in itself. Though it shouldn’t if our ass-backward culture worked right.

Unfortunately, due to deadline or exhaustion, I think the IUD turned out being the centerpiece of the story. I was stunned when she talked for the last eight minutes.

This was great. Every time I’ve had the pleasure of hearing you speak, I feel like whatever’s happening is all gonna be all right. Sex-positive parenting gathering years ago at Shameless, some nerve-jangling stuff at Slutwalk one year: two examples of times I’ve thrown myself and my life into new places and you’re there, and I feel even surer of myself in less-easy life choices.
I can only assume that you’re some sort of benevolent witch. 😉

THANK YOU! What a compliment!!!

Loved the Strangers podcast, and really enjoyed Lea’s interview, and learning about you. What an inspiration you are, and your joy in what you do clearly shined through. I think you are a pioneer in this type of therapy, for sure. Wonder how many others like you are out there? (meaning…how many really love and embrace what they do)

And in my humble opinion, I didn’t think Lea was at all obsessed with the IUD at all. I think as an interviewer, she used that part of it to bring it around in conclusion and how she had a different perspective on public dispay of it toward the end. I’m grateful that she’s introduced us to such a fascination topic! Let’s face it, I’m sure you are among the minority of people who display something like that. 😉 My mantra….Live and let live!

First tomato of the season 👶🏻🍅 https://t.co/KFBnbQG2LT

Just got A Woman's Guide to Cannabis on audio, it's narrated by my friend! I applied for my Rx card, am awaiting wo… https://t.co/YoDk2efnKv

Funeral today. This tears me open every time. 💔