Ed Note: From the archives. I look forward to working with clients again in a more normal way later this year!

Kyle took the train from Chicago.

All day he traveled, portable oxygen tank in tow.

He didn’t listen to podcasts or music. His mind was too occupied with thoughts of what was to come –

You see, Kyle was overcoming great obstacles in order to find answers and rediscover intimacy with another person through surrogate sessions with me. It had been seven years since he was last with a partner, and he was missing human touch terribly.

Why? Life took an unexpected turn from him.

I’m always fascinated by my client’s life stories, and his was especially interesting.

As a forensic anthropologist, Kyle traveled the world working on ancient civilizations and gravesites. He was fit, had a passport, and worked outdoors a lot, in all kinds of conditions. Destinations included South America, Australia. He was next scheduled for a project in Europe, and had his sights set on Asia.

Then one day, at a church in Mexico, disaster struck – literally. The team was digging in trenches, excavating an old sacred graveyard for relocation. Despite wearing a Hazmat suit and respirator, something went wrong when a 400 yr-old-bone was hit with a pickax. Bacteria exploded in the air, and invaded his lungs. He suffered serious pulmonary damage, and has been on oxygen 24/7 ever since.

A couple years after that, he was hit in the ass with colon cancer, and had to undergo risky surgery to remove 1/3 of his colon. The doctors warned him he might not survive the operation, due to his lung condition. They had to give him an epidural and twilight meds instead of general anesthesia!

Incredibly, he survived this double whammy.

Nowadays, Kyle is the same age as me (43) and lives with his parents on disability. He can no longer drive. He’s overweight and in poor health. His lifestyle went from adventurous globetrotting to being tethered to a tank in his bedroom, more or less homebound, living vicariously through the internet. He is an odd combination of extremely worldly and intelligent, and emotionally stunted and childlike.

With all his limitations, I was confident we would have great sessions, but was doubtful of the logistics. I get many clients from out of town who sometimes travel hours to spend time with me. This was going to be a big challenge for him, but he was determined to pull it off! He started saving his money, booked a hotel, found out the train schedule.

I mentioned the situation to a few of my friends, and they were leery. Wasn’t it risky to rendezvous with a person so ill? What if he turned blue, stopped breathing, got hurt? These were certainly logical concerns. Should I listen to my intuition, or them?

I discussed this with him. We covered backup plans, extra oxygen, local suppliers, I took a CPR class. He brought his meds, CPAP machine, all the extra stuff you have to pack when you have medical issues.

So, both knowing we were taking a calculated risk and opting to take the positive route, we planned a sexual adventure weekend and he took the train to St Louis.

I picked him up at the station and drove him to his hotel.

For our first session, we laid the vanilla foundation. We undressed and did body show and tell, and I touched him allll over. It was electric heaven. I showed him my two little hysterectomy scars on my belly, and he wowed me with his long, jagged scar that ran from his navel down to his groin.

It was the first time he was naked with another person in years! His first time with a real live loving slut with a pussy and curves and soft skin! He LOVED my hairy underarms, and I stood over him so he had a nice view of my pink lips and cute bush. I slowly lowered myself onto his face. OMG I was smothering a man on oxygen with my pussy!

“Can you breathe?” I kept checking in. I told him to raise a hand if he needed a break. He was so hungry for it, I needed a break before he did!

We cuddled and caressed and had pillow talk (one time he sucked a dick at a glory hole and guess what? He liked it!) We had a perfectly lovely time. It amazes me how easy it can sometimes be to get naked and intimate with a person you just met. It feels natural when you go into it with an open heart, when you can be vulnerable and authentic.

The next day, he was trapped in his hotel room for hours, because they delivered the wrong oxygen equipment. I felt so bad for him – here he was, in a different city, in the same situation he is at home everyday. Ugh!

So as soon as he got the right tanks, I picked him up and we went to the history museum and checked out the toy exhibit. Then we went back to my house and I made us dinner. Then we went to my sister’s place in North City for a bonfire and hung out with a bunch of really nice people. (He made sure to sit several feet away from the fire.) We bundled up in blankets and talked about the election, jobs, babies, cats.

Afterward, I drove him back to his hotel, and walked him up to the room. I had a surprise for him. Once the door was closed, I raised up my skirt, looked him in the eye, and told him to rip my pantyhose off. This man has jerked off to a “How Things Work” documentary featuring a pantyhose factory, so I knew he’d appreciate it. His eyes lit up, it was great! There’s something very satisfying about ripping clothing off a person consensually – it’s so playful.

It turns out, he had a surprise for me, too – this awesome steel skull butt plug! 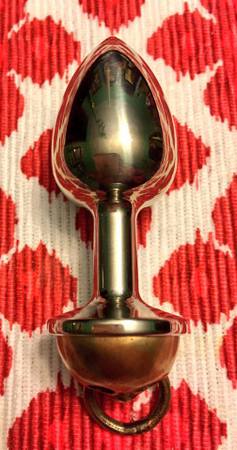 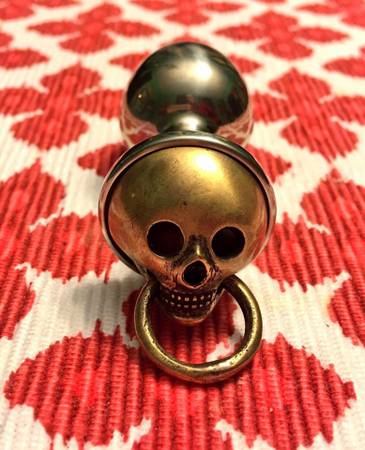 We both have a thing for skeletons and bones. In fact, as an anthropologist, he has four legal human skeletons in his possession. Holy shit, you never know what’s lurking in people’s houses! He hides stuff he doesn’t want his mom to find in with the bones because he knows she steers clear of them – ha!

Our second session was full on kinky! We negotiated a naughty fantasy scene – I was his aunt, and he was my nephew. I was taking advantage of him while his parents were at church. I made him get naked and fondled him. I forced him to suck on my breasts and lick my pussy. I busted out the vibrating butt plug in order to warm his ass up. I wondered how anal play would go, since he had part of his colon removed. So of course I took it slow and checked in with him often. He loved assuming the submissive role and feeling used and “violated.”

Then, I got out my strap on and told him I was going to warm him up for his uncle to fuck him, who was much bigger. I told him about my plans to turn him into our sex slave. 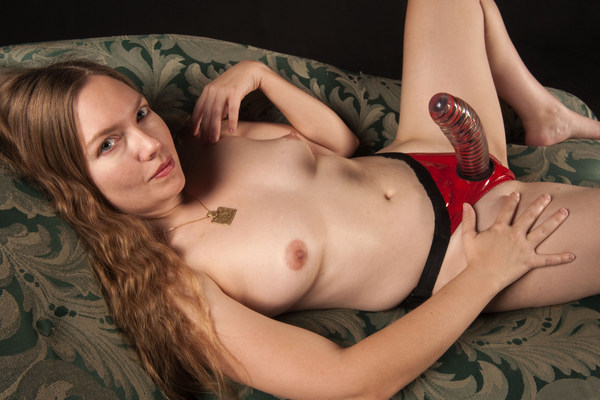 My beautiful strap on. Photo by Stan

Using lots of lube, I slowly penetrated him. He was a good boy and didn’t squirm too much. 🙂 When he had enough of the ass reaming, we switched around and had condom sex. I hopped on and it was a successful ride! His face was so shy and blissful – and had a nice healthy pink color! He warned me that sometimes he turns blue, but sexy time seemed to be very good for his complexion. And his lung capacity surprised him. Sex tends to be healing, and the pleasure endorphins tend to override pain and allow for increased stamina.

So there you have it folks – you CAN romp – and even peg! – a man who has a chronic lung disease and is a colon cancer survivor!

I left him with a parting gift – my stockings. Silky and soft, they carried my scent and female energy. He assured me he would love them well. 🙂

A couple days after our time together, I received this amazing note from him:

“Kendra, I felt broken and not worthy of any intimacy or sexual release. I thought my breathing issues would preclude me from having sexual pleasure.

I was repressing my need for pleasure with self- pity and doubt. So I took the chance and called on you to help me work through my faults and preconceptions about a person with such health issues have a sex life. Our sessions were like my virgin self coming through again. I felt alive and joyous a man who has come through a terrible ordeal to find sexual bliss with a person who is nonjudgmental and takes my limitation at face value and show me how to overcome them. I want to say thank you from the bottom of my heart you have made me whole again!”

I’m so happy and proud of this outcome! If only sharing intimacy with others could be easier. Cherish the time you have with loved ones.

Don’t take your freedom for granted.

Kendra, this is such a beautiful story. We all crave touch and intimacy, and we all deserve to have it. Way to go, Kyle!

I love this story; thank you so much for sharing.

Wow that was a good one! I’d say he was a lucky guy with those encounters!!!!

After reading Kyles story. I think I found hope for me.