We went to the symphony the other night. I was moved to tears. I was reminded of my sweet, gentle grandfather, who introduced me to classical music. 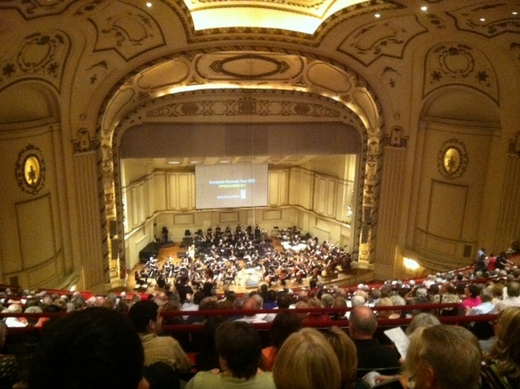 We were in the last row at Powell Symphony Hall!

Watching the stirring concert, I thought to myself, “I would love to get flogged to intense classical music.” —Being warmed up during the soft parts, and wailed on during the crescendos.

I meant to tweet that sentiment, but forgot. (Sometimes I leave messages for Matthew on Twitter, because I know he will see it and take note.)

But apparently, his ESP worked better than my memory, because the other day, I went over to his house, fully expecting a laid back hangout, and ended up getting an earful instead.

I arrived a bit early. He greeted me while brushing his teeth. He gave me a hand signal to stop right where I was, in the doorway. Immediately, I could tell something was up.

Once his mouth was clear, he ordered sternly, “Don’t rinse off. Don’t brush your teeth.”

Eep! That’s what I usually do if I’ve been running around all day. It gives me peace of mind that I won’t offend the person I want to be close to. 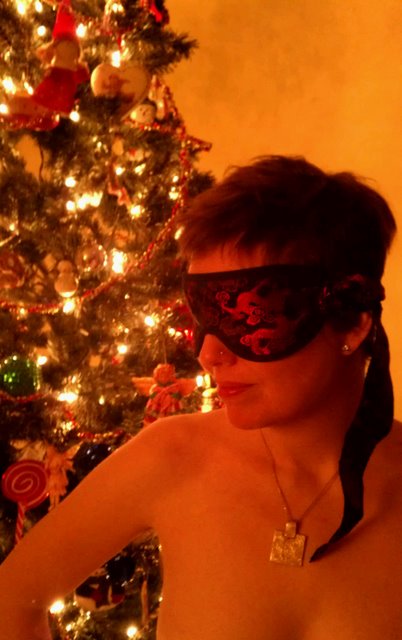 I obeyed, confused and slightly uncomfortable..

He held a red and black satin blindfold with elegant tying ribbons in his hand.

Then his next command was issued.

“Take all your clothes off.”

I hesitated for just a moment. I was still standing in the doorway. But he knew best, so I quickly disrobed.

Then, he tied the blindfold to my face.

Taking my hand, he led me to the bedroom and situated me on the bed.

Then, he affixed large headphones to my ears.

Classical music swelled in my ears, sweet and sharp.

Then, he commenced to teasing me with a world of sensation play ~

His mouth on my breast made me jump! His beard served as yet another sensation play tool – prickly against my soft flesh, surrounding his supple, seeking mouth

A few minutes later, he repeated the process, but this time, with whiskey

Suddenly, I felt the mad buzz of Hitachi Magic Wand on my belly. I hadn’t heard it switch on.

Next, he guided it to my hand to hold on my crotch.

Then, he turned my head and forced it into his crotch. I was surprised to find his dick flaccid with my mouth, and set to make it grow with my eager ministrations.

It swelled until it filled my mouth.

I finally exploded, screaming and primal.

Then he had me jerk him off on me. His cock bobbed over my face. I spat on my hand for lube, and pulled his orgasm out.

Then, I felt shot after shot hit my torso, strong lines between my tits, getting in my hair, gathering at the center of my clavicle.

Only then did he release me from the swelling music and blindfold. The first thing I saw was his great, furry chest looming over me. He leaned down to kiss me. He was completely slick with sweat and passion.

“What was that?” I breathed.

“Beethoven’s First Symphony,” he replied. “One down, and eight to go. I’m going to make you feel every one of them.”

(Click here to read the Second installation of the Beethoven series)

You say you mourned the passing of classic 99. Do you know on HD radio KWMU-3 is classical? You can at least stream it on the Internet.

Classic 99 is still streaming on the internet as well, and has been the moment they got yanked from radio air.

In addition, Radio Arts Foundation is preparing a new classical station due to hit regular airwaves (no HD needed) in STL within the next few months. It will be a spiritual successor of sorts to Classic 99, as it will have some of their old shows and share some of the archives of Classic 99. It will also have archives of SLSO, but currently not the live performances as STL Public Radio currently airs those. (It would make a lot of sense to move over once that deal is up, though.)

Yes, thank goodness for the internet. Just wish I could listen to it in the car like the good old days!

Really liked this one 🙂

The headphone/music element reminds me of a fantasy I’ve had for some time but haven’t had an opportunity to fulfill. Basically the notion was that I’d be tied up, headphones on with music playing loud enough to drown out anything in the room, and then teased for a good long while.

The key thing with this concept though was to make sure there was a decent element of sensory deprivation involved. So after being tied up, I’d be left there for an indeterminate amount of time. Just sitting there, listening to music and wondering when something would happen. Maybe it’s only a few minutes, maybe it’s a half hour. Who knows? So I’d be sitting there anticipating what might happen. Would I start imaging touches that weren’t there? What would those first touches feel like? Just get the mind so intensely focussed on those sensations…

I further wondered if there could be an element of conditioning in this. Like do this sort of thing repeatedly with a set sound track (like a Beethoven symphony). Figure eventually just the music alone would get your engine going 🙂

Fuck yeah! I love it!