This is a quick recap of our trip to Austria. Rest assured – Europe IS all that, and we can’t WAIT to return! We took hundreds of pics – it was hard to pick a dozen for this post.

We started things off in a Chicago bar, buying a drink for an American soldier en route to Korea. He showed off for us by guzzling the 20 oz beer in six seconds! He warned us to avoid women in Austria with dark hair and blue eyes – they were Turkish and their men would go after you if you flirted with them. He learned his lesson the hard way when he was chased 20 blocks by a gang of Turkish men wielding chains and pipes. Um, noted…

There were a lot of beautiful people in Austria. In Vienna I got dizzy watching all the people pass by on foot, bikes, subway, train… each one of them had their own story and it was overwhelming to comprehend…

Anyway, we drank a lot of beer in Austria. Here’s a his ‘n hers set with some super fancy little (ridiculous splurge) truffles made with real sugared flowers and leaves: 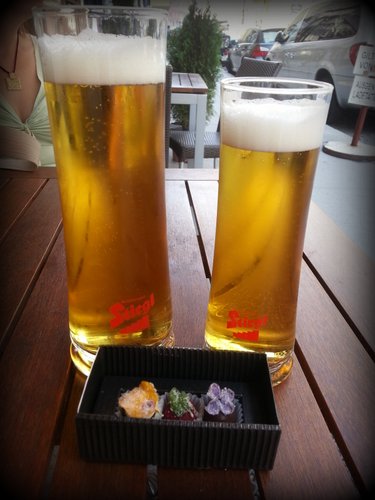 We stayed at three different AirBnB places. We chose well. Each one offered its own charm and delights. The one in Salzburg was the fanciest – nestled against a mountain, and straight out of a designer magazine. Here, a chocolate on the pillow: 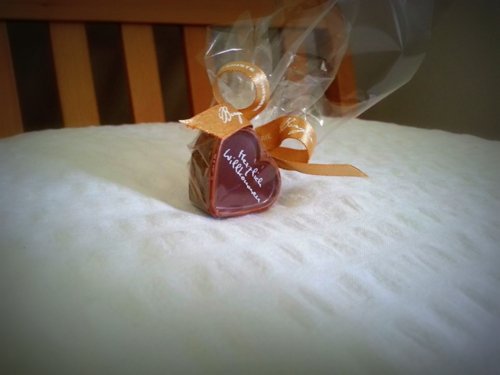 Everything was so fucking romantic! One time, after leaving a hugely popular beer garden with amazing beer (the bottle caps rightly declare, “Beautiful Bier!”), we took a hike up a mountain. We encountered old walls, archways, and tiny buildings, all covered in ivy and moss. We turned the corner at the top and discovered a luxury hotel castle that blew our minds.

It was TOO perfect, and it was practically empty, so it had this creepy, Shining feel to it. We had drinks and dessert on their rooftop restaurant. The server brought me warmed blankets to cloak me from the mountain breeze, along with this “Hotel Surprise”: 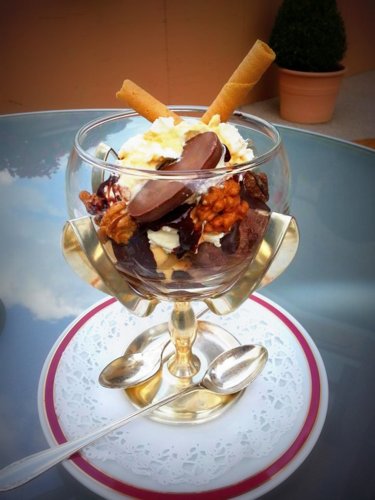 Made me feel like royalty! This was our view as we ate and drank. Except for the breeze, it was eerily quiet: 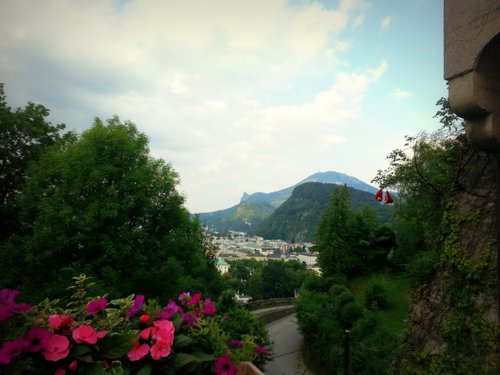 Far off in the distance, there were hang gliders soaring above the far mountain top. It was breathtaking just watching!

We got to drive back to Vienna on the autobahn. It was sooo amazing to be on a highway that had no cracks, potholes, lurking cops, roadkill, billboards, or idiot drivers! This was the scenery: 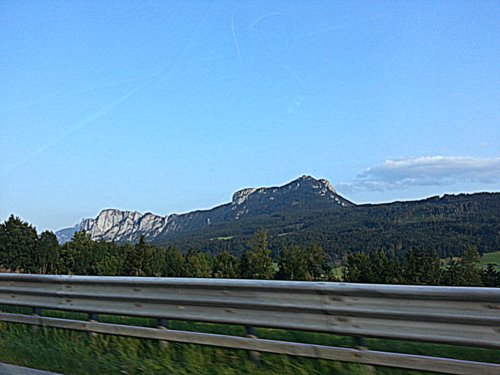 It wasn’t just outdoors that was beautiful – the building were as well, from top to bottom: 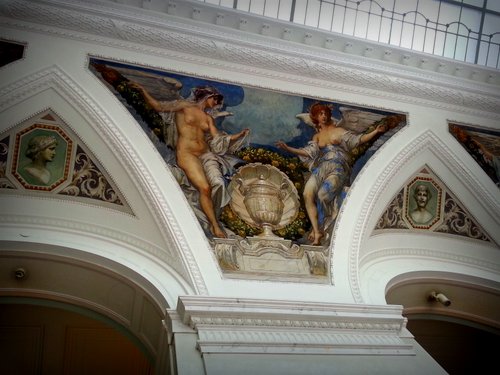 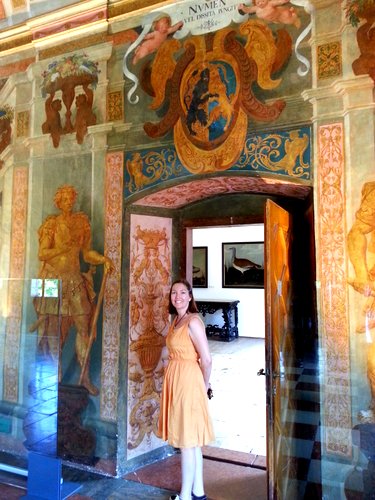 The museums were amazing, and sexy. I got pretty excited in the armor museum, which shared the same palace as the ancient musical instrument collection: 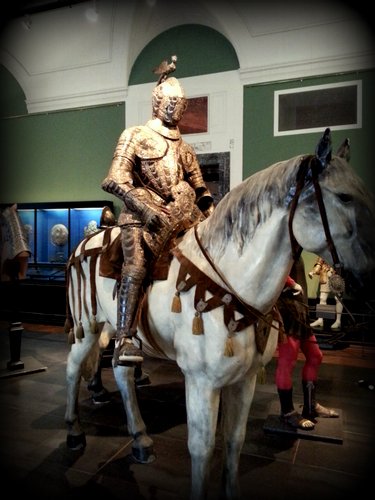 It went on and on!

We toured Schonbrunn Palace (tip: get there early on a weekday and you practically have the place to yourself!) We also visited the Imperial crypt where all the royal bodies were stored for eternity. I found this sculpture particularly haunting, though each sarcophagus was more elaborate and symbolic than the last: 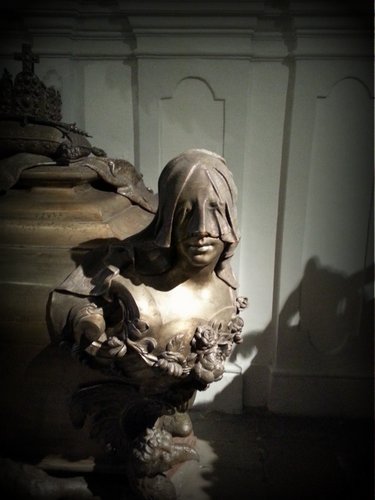 I also got some dwarf action while over there. I have a thing for dwarfs. I saw a real, live dwarf couple! I was so excited. Check out this awesome display in the cemetery where Beethoven is buried: 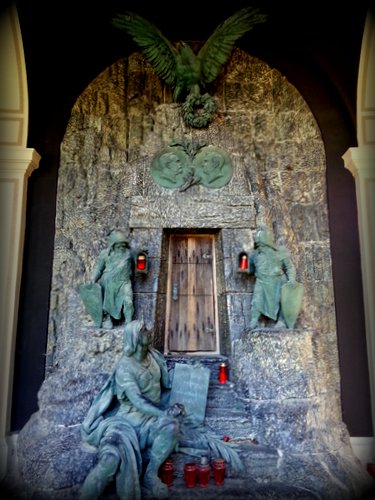 And there was a garden full of dwarf statues on the grounds of one of the palaces: 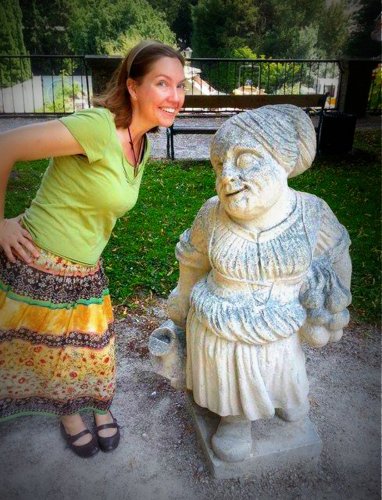 Another thing I looked for over there were unicorns. My daughter is having a Unicorn vs Zombie theme birthday party tomorrow. Check out this awesome unicorn zombie! 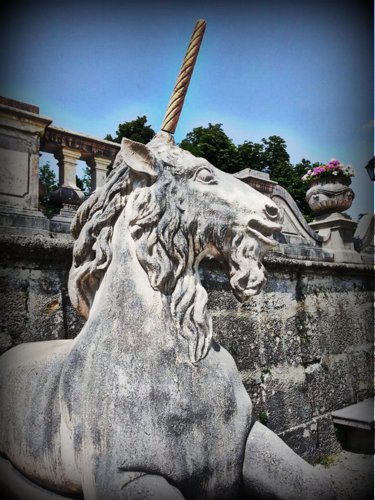 So yeah, the trip was so memorable for so many reasons. Our last day was the most special. I can’t wait to tell you all about Beethoven Day!

Glad you guys had a great time! The pics are awesome.

Waiting on his ashes. https://t.co/mqRkC6ULHP

What happens to a witch when she loses her familiar?