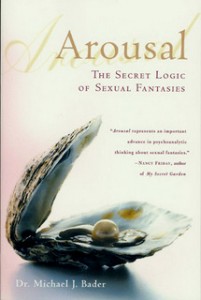 I’ve had the book Arousal: The Secret Logic of Sexual Fantasies

on my shelf for a long time. It tempted me with its mysterious title and sexy cover (I LOVE oysters, and I LOVE my pearl, if you know what I mean).

Well, I finally dusted it off and read it, and it blew my mind, and I’ve been recommending it to people left and right ever since.

Here’s an intro concept from it that should provoke your thoughts:

“There’s a joke that says that when two people have sex, there are six people in bed: the two lovers and the parents of each of them.”

Is that creepy, true, or both? I hope you’re imagining group sex with your parents right now.

A sampling of the MANY interesting points brought up in this book:

– “Sexual excitement requires that we momentarily become selfish. There needs to be a tension between selfishness and caring, between using and pleasing your partner.”

Do you know what this means? Sometimes, when it comes to sex, you need to be ruthless. You need to let go and stop worrying so much about every little move and just focus on the pleasure. YOUR pleasure.

– Have you ever known a woman who is really bitchy toward her male partner? He’s such a nice guy, he tries so hard to cater to her wants and needs, yet she treats him like an annoying puppy? This book explains the reason behind that lopsided dynamic.

– Survivor guilt and unconscious parental jealousy is behind a lot of the issues we face with our parents. Have you ever wondered why someone would start drinking heavily when they became successful in their field? Or why some parents sabotage their kids and excessively criticize instead of support them in their endeavors? This book goes into the details behind those perplexing behaviors, and much more.

All these ideas got me so excited, I contacted the author, Dr. Michael J. Bader, and flooded him with questions:

Are you aware of the current sex-positive movement in the U.S.? Are you noticing any progress in our country when it comes to our bodies/shame/sex? Do you think things are improving? What do you think of all the talk about slut-shaming, body image, sex education – do you think it’s all talk, or is it actually changing mainstream perception?

Also, I thought it was interesting that when I told people about some of the ideas in your book, particularly how our parents can influence our sex lives, they tended to react defensively and shut down. Have you experienced similar feedback?

ALSO, why are so many moms miserable? In your book you keep talking about adults who had sad, sick, miserable martyr moms and distant dads growing up. UGH. Yep, that applies to me, too!  I’m a mom and I’m happy, healthy, well-adjusted person who enjoys a rich and fulfilling sex life – what does that mean for my daughter? Will she end up boring?!

Seems to me that the sex-positive movement has gained some steam and it’s a good thing, as it simultaneously evokes the most repressive and reactionary impulses as well!  One thing I feel pretty strongly about and am endlessly curious about, is that I believe that the underlying psychological dynamics of sexual preference and fantasy are universal, so as people become freer and more liberated, they never are liberated from fantasy.  This is good news!

Folks who are swinging or experimenting with fetishes, kinky shit, etc., are enacting a fantasy in this definition of it and are motivated by the same need to circumvent pathogenic beliefs.  And those beliefs always involve some variation on the themes of guilt, worry, rejection, helplessness, or inferiority…..

I’m not really sure how someone raised in a family with a happy and robust mother who is not repressed will develop their sexuality. But it is IMPOSSIBLE not to feel some version of survivor guilt and IMPOSSIBLE not to experience feelings of rejection….

There are social reasons why so many mothers feel victimized and disappointed in their lives and why so many fathers are disconnected from themselves and their families. Our culture is not very kind to families. All the problems that our society faces – sexism, racism, economic insecurity, crime, violence in the media, alienating work, poor education, drugs, cynicism, environmental degradation – intimately affect the lives of parents, influence their state of mind, their self-esteem, and the quality of the energy they put into their relationship to their spouse and children.

Can’t we say that even good parents sometimes fail, and that these failures have psychological consequences for their children? At the same time, we should compassionately acknowledge that these parents also love their children, want them to be happy, and do the best they can to make it possible.

When we look inside the mind, we find the world.

Finally, there is absolutely no correlation whatsoever between how damaged or fucked up someone is, and the types, intensity, or content of their sexual fantasies or preferences. NONE.

There are so many intriguing concepts discussed in this book, I highly recommend it to anyone feeling guilt, shame, doubts, confusion, or even plain old curiosity. Take a journey of self-discovery, and unlock the secret logic of YOUR sexual fantasies.

As always Kendra, very thought-provoking! I want to read this book now. And that’s so awesome you contacted the author to discuss with you!

Kendra thanks for doing such a nice review of this book. It will be another one to add to my list of books to buy, read, ponder and learn from. So many books so little time.

Thanks for posting a review of this. It’s interesting stuff, and I like that idea of two people in bed being really six. And maybe not just other imagined people, but other versions of ourselves.

Thank you so much for this post. The part you added about being ruthless really drives the point home. This is sexual advice so many people should probably follow. Myself included.