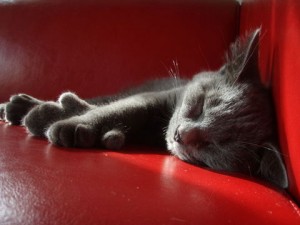 This is a follow-up to the wonderful guest post I shared the other day from a woman new to polyamory struggling with her illogical, runaway emotions.

I’ve been there. See?

Things you should know when you’re new to polyamory:

Every person experimenting with poly who has contacted me in the middle of their biggest freakout reports back to me a week or two later that things are much better, and that the experience has brought them closer to their partner or others. That’s what polyamory is all about – connecting with others in ways that feel right to YOU.

The rigid rules of traditional society don’t work for a lot of people. It takes courage to try a different path. You may feel like your friends don’t understand, and afraid of what your family might think.

REPLACE THE FEAR WITH LOVE.

Imagine how Lewis and Clark felt as they blindly navigated their way out West. They forged the way for others, and now, we have San Francisco. OK, now imagine Lewis and Clark at Folsom Street Fair…

TANGENT! (sorry, back on topic)

Sometimes – but not always – you’re not partnered with the right people. Just like other relationships (monogamy, work, family), the problem might be the dynamic. Don’t be so quick to blame polyamory OR yourself.

I feel like a poly pro, but I’ve been doing it for 10 years. Think about where you will be in 10 years. As for me, 10 years ago I was a nervous wreck; whether I was driving to dates or staying home while my partner was out with someone else, my stomach was in knots – NOT a very sexy feeling.

Advice from a woman who’s been doing it for more than three years and used to have jealous freakouts galore:

“My biggest advice would be this. Don’t ever try to feel NOT jealous. Feel it. Feel it deeply and express it. And then understand that your jealousy is not a call for your partner to change their behavior. One of the men I am dating never gets jealous, so I spent a lot of time hiding my own feelings from him in our early days. Another man I’m dating gets more jealous than me, but has learned to deal. I still get jealous, but it comes and then quickly leaves.”

“Rules are made to be changed. Cut everybody some slack (including yourself!) but be mindful of the things that hurt others and learn from them.”

“I’ve seen more than one relationship saved by poly. I think it depends on what the problems are in the relationship. If the ‘problem’ is truly just that one person (or both) wants the freedom to be involved with other people, and the relationship is otherwise strong, and both are willing and able to expand their minds to accept that change in terms in the relationship, it can work. Sometimes, it takes a dire situation to convince someone that they should re-examine their world views. If the relationship has other problems, then, well, you need to fix those first.”

“The biggest lesson I’ve learned in my current relationship is that it’s okay to feel jealousy; the difference in poly and traditional relationships isn’t a lack of jealousy, but how you deal with it.”

“When I start to feel pangs of jealousy, my partner doesn’t get defensive; he doesn’t start trying to explain the situation into something benign; he doesn’t make me feel bad for having an unpleasant emotion. He simply shows me that he loves me, and that I’m important to him. Which is all I need. It’s worked every time so far.”

“Perception is not always reality. Be mindful of irrational fears and feelings. Just because you think it or feel it, it isn’t necessarily true.”

“Sure, go ahead and try the ‘Don’t Share Details’ technique, but keep this in mind: Your imagination is WAY more wild than reality.”

“Own your own feelings. No one makes you feel anything – it’s all you.”

“There is always and will always be enough love for you. If you start feeling ignored or insecure, think about how you feel about your friends and lovers. Remember, you think about them and love them even when they aren’t around; therefore, they are probably thinking about you and loving you right at this very moment. And don’t be afraid to ask for a hug or some reassurance. Everyone needs reassurance sometimes, and you are giving a great gift to your loved ones by allowing them to reassure you when you’re vulnerable.”

A great little talk by Cathy Vartuli and Reid Mihalko on jealousy as a signal that needs aren’t being met, check it out!

And finally, a post called “How to Have Your Cake and Eat It, Too: Five Things That Make Polyamorous Relationships Work,” shared with me by Alan of Polyamory in the News.

Poly pros: how long did it take for you to “get used to” the polyamorous lifestyle? Months? Years? Honestly, I’ve been practicing it for about ten years now, and I’d say it’s only been in the past four years or that I’ve found my comfort zone. If that sounds like a long time, just think about the 30 years of monogamous programming that had to be undone!

I think one of the reasons I’m comfortable in this type of dynamic is because I believe my partners choice to be with me only has to do with who I am not about who else is out there & this is the case no matter the type of relationship we have.

They can have other amazing lovely partners but there is only one of me. If they decide that I’m not for them that’s because of their personal preference not because I’m not valuable. Yes, sometimes it hurts & is disappointing but the reality is not every person you love will return your love in the same way.

I thrive in being able to love & show affection to people I find interesting & genuine, when im limited to do so I’m not being genuine to myself. I like having partners with that same quality so poly is a natural fit.

Just like sexual preference isn’t a choice, I feel like poly really isn’t a choice for me, so I don’t know if it’s really fair of me to add my input.

I’m still human though and can get insecure & need reassurance but that isn’t usually fear about someone else in my partners’ life but my own insecurities.

I think it’s important to realize no amount of ‘rules’ will protect your relationship.

Things that protect your relationship are treating each other with respect, compassion, honor, trust, communicating, autonomy but most importantly LOVE.

And fuck ups & mistakes WILL happen, how you respond & resolve & learn from them is what matters. 🙂

Also when something is going wrong don’t blame the poly automatically ask yourself, if we were a traditional couple & these behaviors were happening how would I respond to them…

>I think it’s important to realize no amount of ‘rules’ will protect your relationship.

Hear, hear. Rules are important to establish structure and support good communication. But I fear that sometimes poly folk create rules in the hope of protecting themselves against feeling things they don’t want to feel (jealousy, vulnerability, etc)… which is not a whole lot different from the reasons couples usually opt for monogamy in the first place. Our rules at this point basically come down to “use protection, give me a heads up when you’re going to be out w/ someone else, and don’t do anything that might fuck up our marriage.”

I’ve been poly and open for the last 8 years, and honestly, I still have uncomfortable feelings at times when my partner goes on dates without me. The feelings are less intense and don’t have much power over me because I made the choice to not let them affect me in that manner. I think a lot of what we feel is beyond our control but how we react is very much within our realm of control and is a choice. I think a lot of people give up their personal power by saying how they react to their own jealousy is not their choice. It is such a victim society and so it is easier to believe someone else (i.e. our partner) or something else (i.e. poly) is responsible for our behaviors but the truth is we all have choices in life. My choice is to recognize that my partner’s behavior isn’t necessarily responsible for my own feelings of inadequacy or insecurity. I also recognize him changing his behavior will not help me overcome these insecurities – in fact, his doing so will allow me to continue to neglect my inner self and avoid growing as an individual.

I am fat and polyamorous. I can’t relaly compare fat monogamy to fat poly, because I’ve been both fat and polyamorous my entire adult life. For me, my last attempt at monogamy was while skinny and in high school, so that’s not much of a comparison! I belong to some subcultures I’m a burner, dabble with BDSM, and a lot of my friends are Pagan since almost everyone I know is non-mainstream in some way, I think there’s a higher level of acceptance and enjoyment for different body types, too. It just hasn’t mattered much for me, but I don’t know how much that depends on the particular social circle I’m in. Almost everyone I know is poly, many of us identify as sluts, and several of us are fat our relationships and sex lives seem to carry on pretty successfully.

only poly for a couple of years, but i find the biggest difficulty is how tough it is for “mainstream relationship society” (for lack of a better term) to accept it.

in relationships that are based (ideally) on honesty and openness, it’s tough to have to lie or hedge to protect someone’s privacy.

I am *very* comfortable with polyamory, and pretty much have been since I first embraced the reality that monogamy wasn’t the only way.

My partners vary with their comfort level. I have found that Jealousy is best thought of as something other than an end unto itself; Rather, it is best to see it as an indicator that someone’s needs aren’t being met. Jealousy isn’t rational – it is an emotional response. Rather than fighting it head-on, you need to find out what lies behind it and deal with *that* rather than trying to make someone feel differently – you might as well ask someone to stop feeling that fire burns them. Instead – deal with the fire.

The closest I have felt to jealousy in my relationships came from an evening where I was asked to leave one of my partner’s homes so that she could start to pursue a relationship with a mutual friend. While was supportive of them having a romantic relationship, my understanding had been that they had *already* had a relationship for several months, and that suddenly they were asking my “permission” – after the fact.

…and in the end, it was all in my head, and only lasted the one evening, until I could talk to my partner about it directly, and found out that I had made an assumption about their relationship having already become a romantic and sexual one.

Beyond that, I am pretty much universally positive about my partners having other relationships, so long as they are healthy ones and with partners who aren’t pushing for exclusivity.