A Gun to My Head

Ed Note: This post was written in 2009. It is the only post I have ever published that was untrue, in that I combined two scenes into one story – one involving rape fantasy in a parking garage, the other being gunplay in my home. Boy, did I learn my lesson with this one. Readers were OUTRAGED we would roleplay something so deadly in public…and it was the same day my partner’s ex discovered my blog. Yikes. I put him in a very compromising position. I’m reposting this as a reference to a slideshow presentation I’m giving in London next month. It’s called “Shocking the System: When Your True Life Tales Cross the Line. It will be previewed at Shameless Grounds on March 3, at 3pm. Come and see for yourself.

Matthew was using his dad’s vehicle for the week, which means he had access to a handgun and a gleaming, ostentatious SUV.

He’s forever challenging me, and this adventure was no exception. For the record, I am a hippie and vehemently opposed to guns and SUVs. I SUPER HATE guns. They scare the shit out of me.

After lunch, we walked back to the SUV that was parked in the dark, dingy parking garage. Lunch was like foreplay, I was SO ready to rock the truck. Plus, I hadn’t fucked in an SUV since 2007. 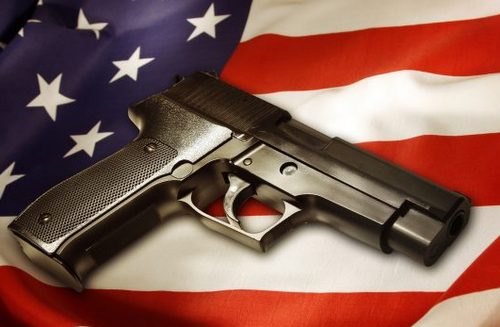 But of course Matthew had to add his own creative twist. He opened the passenger door for me like the gentleman he is, but then – surprise! – he leaned in and grabbed an *unloaded* handgun out from under the seat. He pointed it at my head and shoved me to my knees. WTF?!?! Heart pounding, I knelt on the dirty concrete as he pulled out his already hard cock and told me to suck it.

The cold metal pressed against my skull as he used my face. I looked up at him, wide eyed, completely freaked out. He looked down at me grimly. No one was around.

Then he pulled his cock out of my mouth and I clamped shut. He brought the gun to my lips.

I shook my head vigorously.

He grabbed me by the jaw and squeezed hard. “OPEN.” he hissed.

I cringed and obeyed, and he neatly inserted the barrel into my mouth.

I went through the motions awkwardly, hating the clink of metal against my teeth. I had tears in my eyes.

Once he got his point across, he opened up the door to the backseat and ordered me in with a shove. I scrambled in just as a car drove by.

He got in behind me and tossed the gun up front. I have to say, I make a terrible victim – I was so turned on I flipped up my skirt and hopped on Pop as soon as he sat down. The SUV rocked as we fogged the tinted windows. I rode him until we were both sweaty. I came a couple times, but he didn’t. Despite it being a roomy luxury vehicle, he was pretty much a bull in a chute.

“Let’s finish this at your place,” he panted.

He got out and moved to the driver’s seat, but I stayed put. “I’m not getting near that fucking gun again!” I announced.

On the way back to my house, he reached back and fingered me and got me off while he drove.

Then I lunged over the seat and gave him road head, my half clothed body draped haphazardly.

We got home and threw ourselves on the couch and commenced to fucking again. I rode him like a monkey, grabbing handfuls of his shirt in a death grip.

Then he stood up, I continued to hang on, he walked over to the fucking room table, plopped me down, and pounded me. That’s where he finally came with a roar, good lord!

After things calmed down, I mentioned, “Dude, I spit on your dad’s gun.”