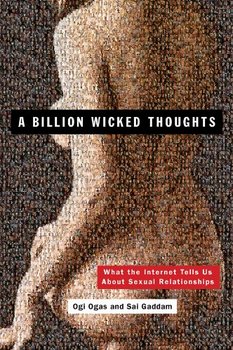 A Billion Wicked Thoughts: What the Internet Tells Us About Sexual Relationships, by Ogi Ogas and Sai Gaddam =SUCH a good book. Even the authors sound like boogeymen from Gomorrah.

Here are some highlights:

– We all know how Kinsey and Masters and Johnson were shut down in their sex research studies, but it’s pointed out that even in this century, scientists are being blocked from sex research. WHY? Why is there still such a stigma attached to sex? Is it not a core aspect of biology?

– The book features keyword searches of several subjects. Here is an example:

pics of bikinis and girls

– The random lists of things that turned people on reminded me of some of the things that used to turn me on as a kid. I used to get really hot seeing the Dallas Cowboy Cheerleader calendar. They looked SO happy and sexy! And I thought Spiderman was sexy. I used to pretend to make out with him, even though he had no mouth.

– Jack Black has a foot fetish.

– Men’s brains are designed to objectify women. Men only need one cue to get turned on – a pic of a butt or breasts, for instance. Women, on the other hand, are more complex, and need two or more cues to get turned on. This is why cock shots sent to women aren’t an effective courting technique. Sure, women like a visual cue, but they also need some personality thrown in, or an element of danger, or knowledge that the man is wealthy. This is why romance stories are so hugely popular with women – the stories combine multiple hot factors, which is necessary in order to properly turn a woman on. Women like a man who has a sexy voice AND is a vampire. This is also why Viagra doesn’t work on women – they need psychological stimulation in addition to physical.

– In fact, men who have the most success with women are the men who can pull off the qualities of being a rogue, as well as being tender – and know WHEN to be a rogue, and when to be tender. You see, women want it ALL. They don’t want just a nice guy, or just an asshole.

– The authors observed that in the romance stories women like so much, there is much more emphasis on the activity of the blood within a hero’s penis than what size it is, or what it looks like. (For instance, “Blood surged to his cock, heated, unexpected, inappropriate.” – from the book Burning Wild, by Christine Feehan.) Women care more about being desired, about driving a man wild with lust, than about how big his dick is. MEN care about dick size way more than women do.

– I learned what “absolute territory” is – it’s the band of skin visible between a woman’s skirt and the top of her socks or stockings. An anime fan explains, “The socks and skirt are usually darker shades than the skin. Therefor the skin is the light at the end of a dark tunnel, gleaming in an aura of brilliance. Always seek the light.”

– My favorite chapter after the “Boys Will be Boys” chapter is the one called “Cheating Wives and Girls Gone Wild.” I love the cuckolding fetish and all that kinky, taboo stuff. There’s a whole section on Literotica called “Loving Wives” that features this type of scenario. I need to check it out sometime, I usually get stuck on the “Incest/Taboo” section, hee!

This book exposed me to dozens of new concepts and theories about what makes us tick, what gets the blood pumping to our genitals – and our brains. Absolutely fascinating!

As I writer, I need to better understand people. To that end, I have just put this book on my ever increasing “List Of Things To Buy”. Thank you Kendra for turning me on to this.

Awww well that just sucks, I thought it was staged and that all participants are willing. I know a lot of people love the concept of someone reluctantly engaging in a sexual act, only to turn the corner and get really into it, throwing moral caution to the wind!

Same, its one of my favourite scenarios (the reluctant at first then loving it) but this never turned the corner. I forwarded through about 5 clips and felt like only a person who gets off on self-loathing could enjoy these scenes. So cringe-worthy. I didn’t get the impression that it was fake.

Kendra, I stumbled onto you from a Facebook thingy….

You’re a hero to me. Thanks for your blogs and writings. I look forward to reading more!

Hi – I came across your blog from a FB link and have been enriched, blessed, and turned on by your frank and positive insights on sex and the psychology behind it.

Also, not to be creepy, but I love your pictures. Particularly: https://thebeautifulkind.com/wp-content/uploads/2013/04/catholicschool.jpg

I was just exploring another one of my fantasies when I clicked and was instantly immersed in your sex blog…everything you just said leaves me both nodding my head, & completely turned on…”Kindred spirits in our outlook on sexuality”…if possible could you please write a guide discussing how to find your “sexual soulmate” or send me the link if you know of such a blog…